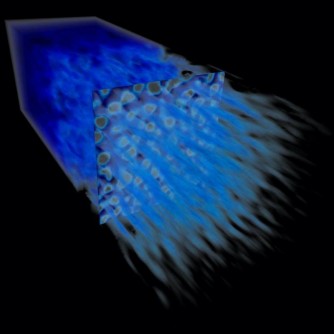 Laser-driven experiments and numerical simulations now show that small-scale turbulence produced at the shock can be key in the initial acceleration of electrons from supernovas.

Newswise — When stars explode as supernovas, they produce shock waves in the plasma that surround them. These shocks are powerful accelerators. They blast streams of high-energy particles, called cosmic rays, out into the universe at what scientists call relativistic speeds, or speeds approaching the speed of light. Yet how exactly they do that remains a mystery. New experiments using powerful lasers have recreated a miniature version of these supernova shocks in the lab, where scientists can observe how they accelerate particles.

The team recreated for the first time in the lab the phenomenon that kick-starts particle acceleration in supernova shocks. They observed that electrons accelerate to nearly the speed of light. They found that small-scale turbulence produced at the shock is key to boosting electrons to these incredible speeds. The results shed new light on the long-standing question of how cosmic accelerators work. Now, researchers can use these findings to produce and test better models of acceleration in supernova shocks. This understanding can also help researchers develop better particle accelerators on Earth for applications in science, industry, and medicine.

Supernova shock waves are among the most powerful particle accelerators in the universe. Scientists believe that these shocks produce strong magnetic fields that bounce particles across the shock multiple times and accelerate them to extreme speeds. However, there’s a problem: in the standard model of Fermi acceleration in supernova shocks, the particles must already be moving very quickly to cross the shock in first place, and scientists are unsure what gets the particles up to speed. Given that the closest supernovas are thousands of light years away, it is very difficult to study these aspects directly from astronomical observations.

The new experiments used powerful lasers at Lawrence Livermore National Laboratory’s National Ignition Facility to create two fast plasma flows headed straight toward each other.  Researchers then studied the properties of the resulting shock waves. Their measurements showed that these laboratory shocks were produced under conditions very similar to supernova shocks. Strikingly, the scientists observed that the shocks accelerated a group of electrons to more than a hundred times the average energy of the particles, with the fastest electrons reaching relativistic velocities.

The maximum electron energy the scientists observed was consistent with estimates for acceleration produced by scattering off moving magnetic fields based on the measured shock properties. Numerical simulations performed at the Argonne Leadership Computing Facility (ALCF) at Argonne National Laboratory confirmed this model.  They further revealed that these magnetic fields were associated with small-scale turbulence produced within the shock wave itself. The team concluded that this mechanism can help accelerate electrons in supernova shocks. These experiments offer a new tool to study the physics behind these fascinating cosmic accelerators.