10-May-2017 9:05 AM EDT, by Brookhaven National Laboratory
favorite_border 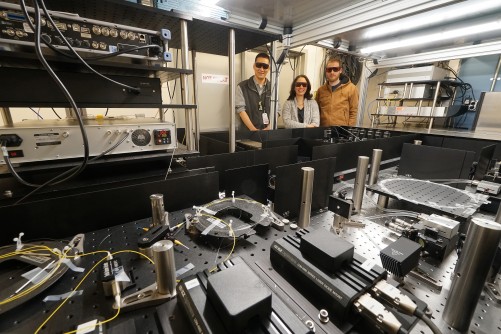 Zhi Zhao, Michiko Minty, and Patrick Inacker wearing protective goggles with the tabletop housing the components that create the green fiber laser in the foreground. Team member Brian Sheehy, now retired, was not present for the photo.

The laser must stay precisely aligned as it zigzags through amplification and frequency-doubling components on this tabletop—anchored for stability to a 50-ton steel block buried deep underground. The beam then travels through a 27-meter-long vacuum transfer line to strike its electron-generating target inside a photocathode electron gun. 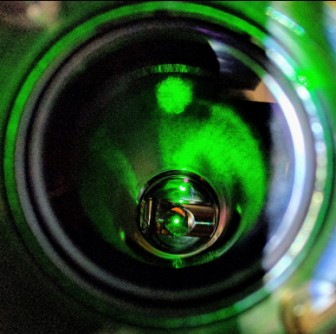 Newswise — Aligning a sequence of amplifiers and mirrors with hair-thin precision on a tabletop anchored to a steel block deep underground, scientists at the U.S. Department of Energy’s (DOE) Brookhaven National Laboratory have produced a powerful green laser. The light—the highest average power green laser ever generated by a single fiber-based laser—will be crucial to experiments in nuclear physics at the Lab’s Relativistic Heavy Ion Collider (RHIC).

“When the green light strikes a target 27 meters downstream from this tabletop, it will generate pulses of electrons needed to cool the ion beams at RHIC to keep them colliding,” said Brookhaven physicist Zhi Zhao, who built the laser system and is lead author on a paper describing its attributes in Optics Express, a journal of the Optical Society of America. In addition to cooling ion beams at RHIC, such a high-power green laser could also have applications in materials processing, laser machining, and generating other lasers.

High collision rates at RHIC generate reams of data for the 1,000 nuclear physicists who come to this DOE Office of Science User Facility to study the intricate details of the building blocks of matter. The collisions reduce the building blocks to their most primitive form—a soup of fundamental particles that mimics the conditions of the early universe. But as the ions circulate through RHIC’s 2.4-mile-circumference tunnels, they tend to heat up and spread apart, decreasing the chances that collisions will occur.

“Intra-beam scattering causes the ions to spread out and get lost, so the beam doesn’t survive,” said RHIC accelerator physicist Michiko Minty, a co-author on the paper and leader of the project to develop and integrate this laser into RHIC collider operations.

Heating is a particular problem when the ion beams are circulating at relatively low energies—in a range RHIC scientists are using to study interesting aspects of how the primordial soup transforms into more familiar protons and neutrons. So physicists at RHIC have been exploring ways to periodically inject a stream of relatively cool electrons to take away some of the ions’ heat.

“The whole point of electron cooling is to stop the spreading of the ion bunches to maximize the collision rate,” Minty said.

Electron cooling has been successful at other particle accelerators. But at RHIC physicists are exploring new strategies for generating electron beams at very high electron energies (billions of electron volts), which requires using linear radiofrequency acceleration of energetic bunches.

The idea is to use pulses of a laser to strike a photo-emissive material—a material that emits electrons when struck with just the right wavelength, or color, of light—inside a photocathode electron gun. In the case of the photocathode installed in the electron gun at RHIC, the magic color is green.

To make the green light, the Brookhaven team started with something invisible, an infrared (IR) “seed” laser at relatively low power. They send modulated pulses of that invisible IR light through a series of optical fibers to amplify the power.

As the light from an additional IR “pump” laser enters the fiber, it excites electrons in the material lining the fiber. When these electrons relax back to their “ground state,” they emit photons of light at the IR wavelength, perfectly in sync with the seed IR waves, gradually increasing the signal strength in multiple fiber amplifier stages.

Once the desired power is reached, the infrared laser strikes a “frequency-doubling” crystal.

“When two photons of infrared light strike the crystal, it emits one photon of a shorter wavelength,” Zhao explained. “Frequency doubling essentially cuts the wavelength in half, changing the IR input to green visible light.”

The green laser light then zigzags along pathways guided by mirrors on the tabletop through various optical components to optimize the net laser output.  These include multiple crystals used to convert short laser pulses into a train of multiple pulses (temporal shaping), a variety of lenses to produce the desired transverse profile of the laser pulses (spatial shaping), and so-called half-wave plates used to pass or reject passage of the laser beam to control the overall laser intensity.

After this, the laser light is guided to a series of electrical optical modulators—“devices that chop out sections of the laser light to produce the desired sequence of laser pulses—a sequence which matches the structure of the ion beams to be cooled,” Minty explained.

The goal is to time the pulses to match to the frequency of the electron gun so the resulting electrons can be accelerated to perfectly match the accelerated ions circulating in RHIC.

“In the end it’s the velocity of the ion beam that ‘decides’ what we need, and everything has to be matched to that. We get a signal from the ion accelerating cavities that is used to generate the timing signals for the components generating the laser pulse structure,” Minty said.

Anchoring and testing the light

Fiber lasers are especially well suited for generating high-brightness electron bunches in photocathode electron injectors. The high surface-to-volume ratio of the fiber supports the generation and delivery of laser pulses at high repetition rate and high average laser power. Also, the dynamics of the laser light propagating through the fiber leads to excellent laser profiles, low variations in the laser’s position, and maintenance-free operation. Taken together these properties result in long-term operation of a highly stable laser, which is essential for the RHIC physics programs.

Two key factors the scientists need to control are the laser’s extinction ratio—the difference between the laser being on and off—and its stability.

“If you have light present when it’s not supposed to be there, you’ll get residual electrons, which can produce unwanted effects,” Minty said. “We’re aiming for a factor of 10-6, which means when we say it’s off it’s off, and only one in a million electrons will come through.”

For stability, the scientists need to ensure that the path of the light doesn’t deviate more than 10 microns from its starting point to the photocathode gun in the RHIC tunnel, even with all the amplification steps and zigzag pathways on the tabletop.

“Overall, the path is about 30 meters—3 meters on the tabletop with 40 mirrors creating the zigzag path and 27 meters in the transfer line,” said Zhao, standing inside the mobile trailer housing the laser outside the RHIC ring.

“We stabilized the table by digging a big hole and burying a 50-ton steel block down at the level of Long Island’s water table, and drilled holes in the trailer to secure the laser table to that block,” Minty said. “You can jump up and down on the floor in here and the table won’t move,” she added, pointing out super stable posts that hold mirrors and other key components on the motion-isolated table.

Also, the long evacuated pipes through which the laser travels are decoupled from multiple smaller optical tables between the trailer and the electron gun located inside the RHIC enclosure.  These tables house optics and mirrors with supports likewise designed for thermal and vibrational stability. 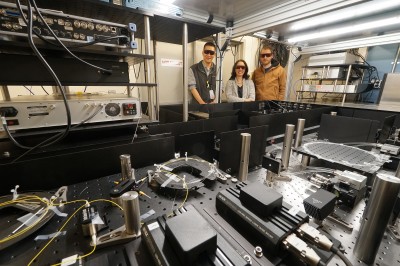 Caption: Zhi Zhao, Michiko Minty, and Patrick Inacker wearing protective goggles with the tabletop housing the components that create the green fiber laser in the foreground. Team member Brian Sheehy, now retired, was not present for the photo.

Caption: The laser must stay precisely aligned as it zigzags through amplification and frequency-doubling components on this tabletop—anchored for stability to a 50-ton steel block buried deep underground. The beam then travels through a 27-meter-long vacuum transfer line to strike its electron-generating target inside a photocathode electron gun. 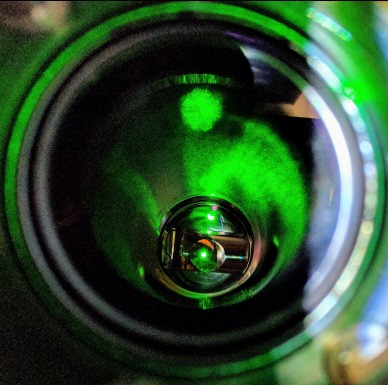