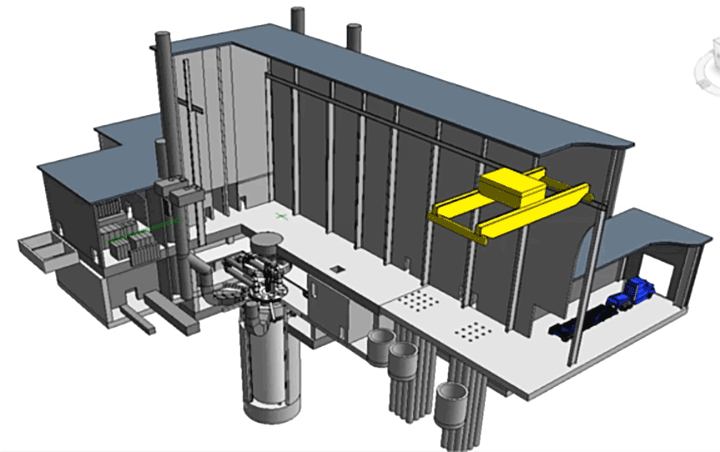 A 3-D representation of the Versatile Test Reactor.

Newswise — Lynne Ecker—chair of the Nuclear Science and Technology Department at the U.S. Department of Energy’s (DOE) Brookhaven National Laboratory—is optimistic about the future of nuclear energy and the critical role it will play in reducing carbon emissions.

“At least 30 small companies are developing nuclear reactors, and a lot of private investments in the field have been made,” said Ecker. “Nuclear energy currently provides 55 percent of our low-carbon electricity. It needs to remain a large percentage of our energy generation or else we will not be able to meet carbon-reduction goals.”

Unlike power plants that burn fossil fuels, nuclear reactors do not emit carbon dioxide-a greenhouse gas-into the atmosphere when they are generating power. However, many of the nearly 100 operating U.S. nuclear power plants are at or nearing the end of their intended operating lifetimes. Sustaining the use of this clean energy source will require the development of advanced nuclear reactor designs. Such development involves an understanding of how intense radiation, temperatures, and corrosive environments change the properties of materials used in nuclear reactors.

Ecker has been studying reactor materials for her entire career. After getting her bachelor’s degree in physics, master’s degree in mechanical engineering, and PhD in solid-state science and technology—all from Syracuse University—she became a materials scientist at the Knolls Atomic Power Laboratory, which is part of the Naval Nuclear Laboratory. Here, she primarily studied structural materials, including steels and zirconium alloys used as claddings (outer coverings) for nuclear fuel rods. She also wrote codes to predict reactor performance.

For someone who had an early inclination toward science and engineering, it was the perfect first job.

In 2004, Ecker joined Brookhaven Lab as an associate scientist. In 2010, she became the deputy chair of the Nuclear Science and Technology Department—a role she held until October 2018, when she was appointed department chair.

Scientists in the department research and develop advanced nuclear technologies; perform neutronic, thermomechanical, and other types of reactor modeling; and conduct nuclear risk and safety analysis. The department is also home to the National Nuclear Data Center, which maintains a library of nuclear reaction information (nuclear structure and reaction cross-sections) that scientists and engineers across the world use as a resource for basic and applied research.

In addition to her managerial responsibilities, Ecker carries out her own research, developing x-ray-based techniques for characterizing the structural, chemical, and other properties of radioactive and nuclear reactor materials. She recently proposed a new beamline at Brookhaven Lab’s National Synchrotron Light Source II (NSLS-II), a DOE Office of Science User Facility, dedicated to the characterization of materials in a radiation environment. With this beamline, Ecker hopes to look at samples irradiated by a new test reactor—the Versatile Test Reactor—that scientists at DOE’s Idaho National Lab are building.

“The characterization techniques that we can apply with the synchrotron are really going to revolutionize the materials we use in reactors,” said Ecker. “One class of materials we’re excited about is high-entropy alloys, which are made up of five or more different elements that are all mixed up instead of being in an orderly array. Previous studies have shown that these alloys are radiation resistant.”

Molten salts—salts that melt from a solid to liquid phase when they are heated to very high temperatures—are another class of potential nuclear reactor materials that Ecker has recently started exploring.

“We’re initially looking at the basic science of corrosion with chloride salts and single-element or bi-element materials, such as nickel and nickel-chromium alloys,” said Ecker.

Though Ecker has transitioned out of the computational aspect of reactor physics, she has remained interested in it throughout her career. Machine learning is one area that Ecker sees potential in for developing new nuclear materials and predicting reactor behavior.

In her new role, Ecker looks forward to expanding the department’s applied nuclear energy research through DOE Office of Nuclear Energy programs, including those to partner with industry on advanced reactor development. One such program is the Gateway for Accelerated Innovation in Nuclear (GAIN). By offering private industry a single point of access to the nuclear expertise and facilities at DOE’s national labs, GAIN seeks to accelerate new, innovative nuclear energy technologies toward commercialization.

Caption: A 3-D representation of the Versatile Test Reactor.