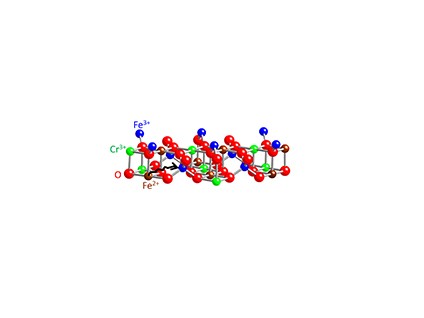 Movement of electrons among the atoms in a material (referred to as conductivity) is critical to many of the material’s properties. In this research, scientists found different modes of conductivity in magnetite (Fe3O4) when one third of the iron atoms (Fe) are replaced with chromium (Cr) to form the semiconductor chromium ferrite (Fe2CrO4); see image. They now understand how the electrons hop from one atom to another, depicted by the black arrow, that are active as chromium replaces iron in the structure.

Newswise — Depositing one layer of atoms at a time can result in materials that greatly improve fuel cells, batteries and other devices. In this research, scientists precisely added chromium to iron oxides to control the electronic and optical properties. The result was a highly ordered thin film of chromium ferrite (Fe2CrO4). Chromium ferrite becomes more electrically conductive by absorbing light.  The material could be useful for vital solar processes, such as water splitting to make hydrogen for fuel, coolants and more.

The research offers insights on how to design and make materials with new performance characteristics. For example, scientists could use the unexpected optical properties of chromium ferrite films to produce hydrogen from water and sunlight. Hydrogen is vital in chemical and petroleum industries and as a coolant. Further, hydrogen is increasingly popular as a fuel for transportation or in the generation of electricity.

In this research, scientists used molecular beam epitaxy to deposit precisely determined quantities of iron (Fe), chromium (Cr) and oxygen (O) atoms to make materials that were predicted to have various degrees of electrical conductivity, ranging from highly conductive to electrically insulating. The investigators made Fe3O4 (a half-metal), Fe2CrO4 (a semiconductor) and FeCr2O4 (an insulator). This study clarified the conductive properties of these iron chromium oxides, showing how the positions of the elements in the crystal lattice, oxidation state or charge (for the cations), and the ability of the electrons to move within the structure resulted in their respective conductive properties. The structure of Fe2CrO4 was shown to be a spinel, having Fe in the tetrahedral positions, but both Cr and Fe in the octahedral positions. The Fe was found to be in one of two oxidation states, +2 or +3, but Cr was found to have only a +3 charge. As a result, electrons could hop between Fe cations at tetrahedral and octahedral sites. However, the team found the conductivity to be lower than that in Fe3O4, where electrons can freely hop between Fe2+ and Fe3+ on octahedral sites. In the case of FeCr2O4, Fe is only present as a 2+ cation. As a result, there is no way for electrons to hop from Fe to Fe, and the material is an electrical insulator. The team showed that Fe2CrO4 absorbs visible light leading to enhanced electrical conductivity, or photoconductivity. The optical and electronic properties of Fe2CrO4 suggest that this material could be useful for important solar photoelectrochemical processes such as water splitting.

U.S. Department of Energy, Office of Science, Basic Energy Sciences and use of the Environmental Molecular Sciences Laboratory and the Advanced Photon Source, national user facilities