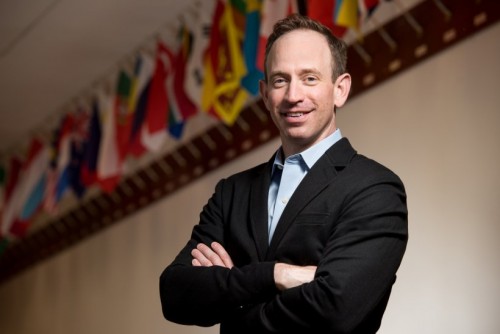 Director Douglas Mans stands in front of EMSL’s wall of flags representing its staff and users from around the world.

Newswise — This is a continuing profile series on the directors of the Department of Energy (DOE) Office of Science User Facilities. These scientists lead a variety of research institutions that provide researchers with the most advanced tools of modern science including accelerators, colliders, supercomputers, light sources and neutron sources, as well as facilities for studying the nano world, the environment, and the atmosphere.

In April 2019, Douglas Mans became director of EMSL, the Environmental Molecular Sciences Laboratory, leaving behind a career in the pharmaceutical industry where he established a reputation for creating partnerships and adopting new approaches to address big science questions.

Mans is known for taking threads of research from very different settings and weaving them together to create something new. “At EMSL, there’s an opportunity to put disparate pieces and experiences together to solve problems that, if addressed alone, would not be solved for 10 or 20 years, or perhaps not solved at all. That’s why I’m so drawn here,” he said.

He sees that potential at EMSL, with its web of expertise and connections around the world. EMSL is the place, he said, where expertise and integrated research are aligned with tackling global issues that a community of users helps define and analyze.

Throughout his career, from graduate student to EMSL director, Mans has spearheaded several collaborations, often in unexpected places. He calls it “connecting the dots—and sometimes adding new dots.”

At Janssen Pharmaceuticals, he helped bring about a partnership with U.K.-based Touchlight Genetics to evaluate novel synthetic DNA technology in the development of new therapies for cancer and infectious disease.

Before that, at GlaxoSmithKline, he initiated a collaboration with the laboratory of Chad Mirkin at Northwestern University, incorporating new approaches to nanolithography as a way to create novel materials in a controlled fashion. He also helped forge key working relationships with IBM, Corning, and General Electric.

One similarity Mans sees between leading EMSL and his previous work is the importance of creating partnerships. At Janssen, he served as innovation director of pharmaceutical development and manufacturing supply, establishing collaborations with academic institutions, start-up companies, government entities, and companies like Dyadic International and TouchLight Genetics.

Recognizing the value of cross-functional collaboration in tackling the complexities and challenges of developing lifesaving medicines in pharma prepared him to lead EMSL’s staff and user community — addressing tomorrow’s challenges in molecular sciences in biology and environment, he said.

EMSL is a DOE Office of Science user facility supported by the DOE Office of Biological and Environmental Research (BER). The user facility is in Richland, Washington at Pacific Northwest National Laboratory. EMSL provides an environment for teams and individuals from academia, government labs, research institutes, and industry across the U.S. and around the world to solve scientific problems.

It has 234,000 square feet of laboratory space in a building that is as big as four football fields! EMSL’s capabilities include in-house world class scientific expertise enabled by multiple types of premier instruments in combination with advanced computing, data analytics and modeling.

In one EMSL laboratory, a soil scientist obtains the best view ever of the molecular players in a small pile of soil from the Midwest. Down the hall, a chemist studies tundra from the Arctic, measuring the effects of a changing climate and charting our planet’s health. At the far end of the facility, a biologist untangles the actions of proteins implicated in the production of biofuels while another explores microgravity’s influence on the structure of plants.

The EMSL user program focuses on molecular science for the two divisions of BER – the Biological Systems Science Division and Climate and Environmental Sciences Division. An example of a typical molecular biochemical pathway experiment is one in which staff at EMSL and collaborators from around the world studied microbial and viral communities in the guts of live moose to understand how the microbes break down biomass.

Scientists from PNNL, The Ohio State University, University of Alaska Anchorage, Norwegian University of Life Sciences, Denmark’s University of Copenhagen, the U.K.'s Newcastle University, and the Alaska Department of Fish and Game took an in-depth look into microbial functioning in rumen.

The work used protein and metabolite data gathered using 600-MHz nuclear magnetic resonance spectroscopy at EMSL and genomic data obtained from the Joint Genome Institute through a Facilities Integrating Collaborations for User Science (FICUS) initiative. This initiative gave the team access to expertise at the two DOE Office of Science user facilities, both sponsored by the Office of Biological and Environmental Research. Studying such rich data in combination with state-of-the-art enzymology gave scientists a glimpse into how microbes are specialized and how they coordinate their tasks to mediate the overall “flow” of carbon within the rumen. The analysis enabled metabolic insights into 180 genomes, most of which were previously unknown, and addressed the underappreciated influence that viruses exert in ruminant digestion.

Another recent experiment in the realm of environmental transformations and interactions is one in which EMSL researchers and collaborators studied fungal spores to uncover the true origin of sodium salt in the pristine Amazon air.

The team collected samples of airborne particles during the beginning of the wet season from an unspoiled rainforest in the Amazon region. They then applied a variety of chemical imaging techniques, such as EMSL’s scanning electron microscope and secondary ion mass spectrometry, and LBNL’s scanning transmission X-ray microscope in the Advanced Light Source facility, to analyze particle size and composition.

Results showed that locally emitted fungal spores contributed considerably to sodium salt particles, which were previously solely attributed to oceanic emissions. To evaluate the geographic distribution and frequency of fungal spores in the air over the Amazon basin, they conducted simulations using the Community Earth System Model.

Modeling results suggested that fungal spores account for approximately 69 percent of the total sodium mass during the wet season and that their fractional contribution increases during the night.

Mans says his best advice is “always be a connector, look to spot opportunities in odd places and areas, and encourage people to pursue them.”

The Office of Science is the single largest supporter of basic research in the physical sciences in the United States and is working to address some of the most pressing challenges of our time. For more information, please visit https://energy.gov/science.