Microbes Making the Most of Their Energy Sources 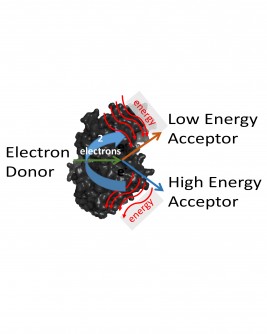 A generalized electron bifurcation reaction. An electron donor provides two electrons that are bifurcated simultaneously to two acceptor molecules with lower energy and higher energy in a hypothetical enzyme. 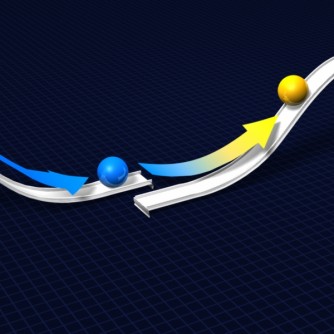 Imagine a blue ball rolls downhill. Normally, it hits the yellow ball at the bottom of the hill, forcing that second sphere to go up the hill. In electron bifurcation, the energy from the blue ball goes into the hill.

Newswise — Microorganisms are most typically thought of as biological nuisances that cause disease or spoil food. However, bacteria and other microorganisms are responsible for many important processes on Earth, without which the planet would be uninhabitable for any form of life.

Microorganisms can even be used to help bridge the gap towards more abundant and economical energy sources. This can occur by microbes that naturally generate biofuels such as hydrogen gas and methane. They can also be engineered to produce other biofuels such as butanol and biodiesel.

The key is that microorganisms need to harness, or conserve, energy in order to live — as all life does. It just so happens that they can also provide useful byproducts — resultant from their unique means of energy conservation — such as biofuels.

One mechanism of energy conservation — termed electron bifurcation — was not discovered until as recently as 2008. Before this discovery, there were only two known ways that life forms can conserve energy.

Now scientists at the Biological Electron Transfer and Catalysis (BETCy) Energy Frontier Research Center are beginning to understand how this process works and how it can aid in meeting next-generation energy demands.

Imagine a blue ball rolls downhill. Normally, it hits the yellow ball at the bottom of the hill, forcing that second sphere to go up the hill. The energy is transferred between the two spheres in this example. In electron bifurcation, the hill, or enzyme, itself mediates this energy transfer from the blue ball to the yellow ball. In the ball analogy, the energy would power an escalator that simultaneously takes the yellow ball up the hill. The hill manages the energy transfer and separates the motion of both balls, allowing both events to occur instantaneously and separately.

To conceptualize electron bifurcation, imagine two hills with a ball at the top of one hill and one in between the hills. By pushing the first one downhill, the impact pushes the other ball up the other hill. However, this process happens simultaneously in electron bifurcation. Perhaps more directly analogous, imagine the first ball is rolled downhill and that energy is transferred to the hill where it powers an escalator that simultaneously conveys the second ball up the other hill. The hill, in this example, mediates the energy transfer and separates the movements of both balls.

Analogously, electron bifurcation proceeds through the simultaneous transfer of electrons to both exergonic (downhill) and endergonic (uphill) reaction pathways. The process occurs within a single protein structure, or enzyme, that consists of multiple protein components, or subunits. Recalling the above example, the enzyme acts as the hill that mediates energy transfer. By coupling the two electron transfer reactions within a single enzyme simultaneously, energy loss that would otherwise escape as heat is minimized. Efficiency is critical for bifurcation because the organisms that perform it tend to live in environments where there is little energy. Thus, every bit of energy that is harnessed is crucial for survival.

Understanding the mechanisms behind electron bifurcation. Unraveling the mechanisms that allow electron bifurcation to occur in microorganisms has clear biotechnological and bio-energy implications. Understanding how microorganisms minimize energy loss during chemical reactions will enable the design of more efficient bio-inspired energy technologies. More directly, several electron bifurcating enzymes are important biotechnological and bio-energy targets. Gaining insight into how these enzymes function at the molecular level will provide a framework for enhancing their utilization in energy science.

Scientists at the BETCy Energy Frontier Research Center are investigating hydrogenases, which are a type of bifurcating enzyme that catalyze the production of hydrogen gas during cellular metabolism in microorganisms. Hydrogenases display high rates of hydrogen production and are thus highly sought-after bio-energy targets. This microbially produced hydrogen can then be harnessed and used as an alternative fuel source.

Interestingly, some hydrogenases catalyze hydrogen production through electron bifurcation (or rather, a version of bifurcation that operates in reverse as the above example). Yet, other than the discovery of the process in hydrogenases, little is known about how it occurs at the molecular level.

Recently, BETCy scientists compared the gene and protein repertoires of microbes that contain hydrogenases (bifurcating and non-bifurcating). The team’s goal was to better understand which hydrogenase enzyme components are determinants of the ability to bifurcate. These comparisons indicated that, aside from the enzyme subunit that catalyzes hydrogen production, additional enzyme protein components were likely necessary for bifurcating ability.

Untangling how electrons taken from a single source are sent down two different transfer pathways is a major focus of bifurcation research. Naturally, electrons should be transferred through the exergonic (downhill) pathway without active interference, forcing them towards the endergonic (uphill) pathway. One idea being investigated by BETCy involves an electron “gating” mechanism. Gating by the protein subunits would allow the transfer and separation of each set of electrons towards endergonic and exergonic pathways. This is where the iron-sulfur and flavin electron transfer components of the enzymes become important. These co-factors then mediate the transfer of electrons through each of these pathways.

Thus, analogous to the ball and hill example, the first electron transfer downhill would drive an enzyme change that simultaneously forces the other electron up the other hill.

Poudel et al. This work was supported as part of the Biological Electron Transfer and Catalysis Energy Frontier Research Center funded by the U.S. Department of Energy, Office of Science, Office of Basic Energy Sciences. The mass spectrometry facility at Montana State University receives funding from the Murdock Charitable Trust and National Institutes of Health of the Centers of Biomedical Research Excellence program. 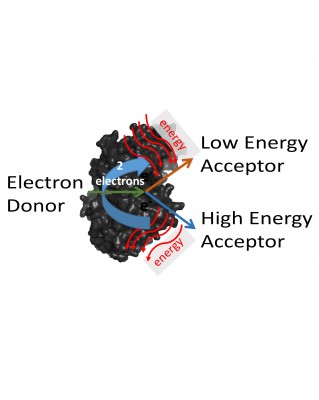 Caption: A generalized electron bifurcation reaction. An electron donor provides two electrons that are bifurcated simultaneously to two acceptor molecules with lower energy and higher energy in a hypothetical enzyme. 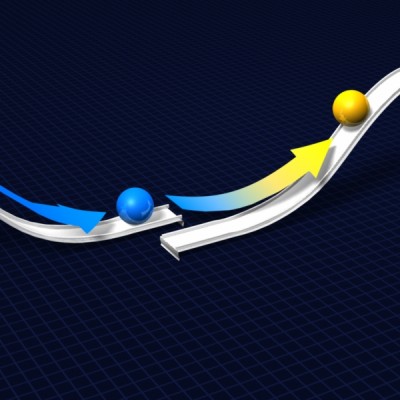 Caption: Imagine a blue ball rolls downhill. Normally, it hits the yellow ball at the bottom of the hill, forcing that second sphere to go up the hill. In electron bifurcation, the energy from the blue ball goes into the hill.