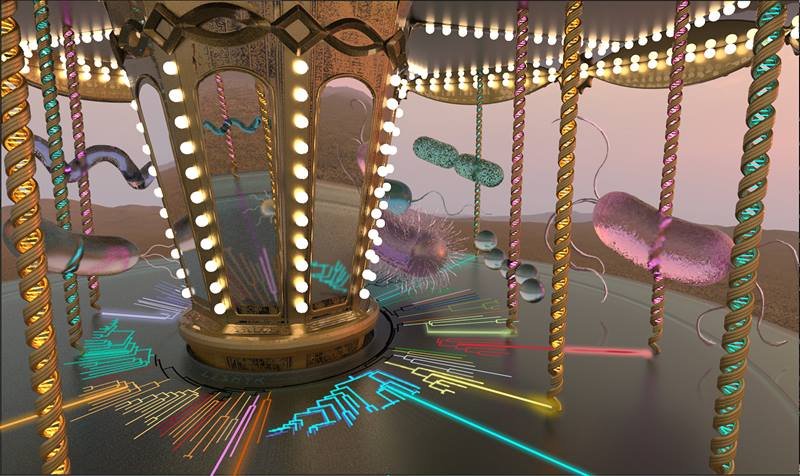 Microbial Merry-Go-Round. In this metaphorical carousel, the velocity of each bacterial cell indicates its relative growth rate. New data indicate that this metaphor applies over a range of ecosystems, from high desert grassland to subalpine prairie.

To better predict how microbes influence how much carbon moves through the water, air, and land, scientists want to compare the influence of evolution (nature) and the surrounding climate (nurture). Based on an extensive study across environments, from mixed conifer forest to high-desert grassland, the team suggests that microbes aren’t so different from larger, more complex forms of life. That is, in determining species traits, nature takes the lead, while nurture plays a supporting role.

With microbial species, we know less about the relative role of nature versus nurture than we’d like. Why? Microbes’ small size and great diversity make measuring their traits in nature challenging. This study offers an improved understanding of microbial trait distribution which influence nutrient cycling, such as growth rate and carbon usage. How bacterial species influence soil carbon cycling may help enhance models to reduce uncertainty when forecasting soil carbon feedbacks to global change.

How much of a microbe’s makeup and destiny is determined by where it finds itself in the world, and how much is explained by its evolutionary past? While evolutionarily encoded traits (“nature”) have been more predictive in plants and animals than environmental variation (“nurture”), the small size and great diversity of microbial species have made it challenging to answer this question in life’s microscopic realm. Now, a team of researchers at West Virginia University, Northern Arizona University, University of Massachusetts – Amherst, Lawrence Livermore National Laboratory, and Pacific Northwest National Laboratory used a new approach to determine the traits of microbial species by tracking isotopes into their DNA, indicating rates of carbon assimilation and growth. The team measured these traits in four ecosystems along a gradient in elevation, temperature, and moisture.

They found that, as with plant and animal species, the evolutionary history of soil bacteria (that is, “nature”) explained more variation in the measured traits than did their local environment (that is, “nurture”). Evolutionary history explained up to 65 percent of the variation in trait values, while the variation explained by the ecosystem never exceeded 20 percent. Even across vast changes in temperature and precipitation, the traits of microbial species remained relatively consistent. For example, microbial species and families that rapidly used carbon in soil from warm desert grassland showed very similar activity rates when assessed in soil from a comparatively cool and wet forest.

Determining whether nature or nurture has more influence has practical value: if traits are hard-wired by evolution, they are consistent and can be used to make predictions about the natural world.

This work was supported by the Department of Energy, Office of Science, Biological and Environmental Research, Genomic Sciences and the National Science Foundation (Dimensions of Biodiversity).