Scientists discover key types of microbes that degrade organic matter and release carbon dioxide and methane into the atmosphere. 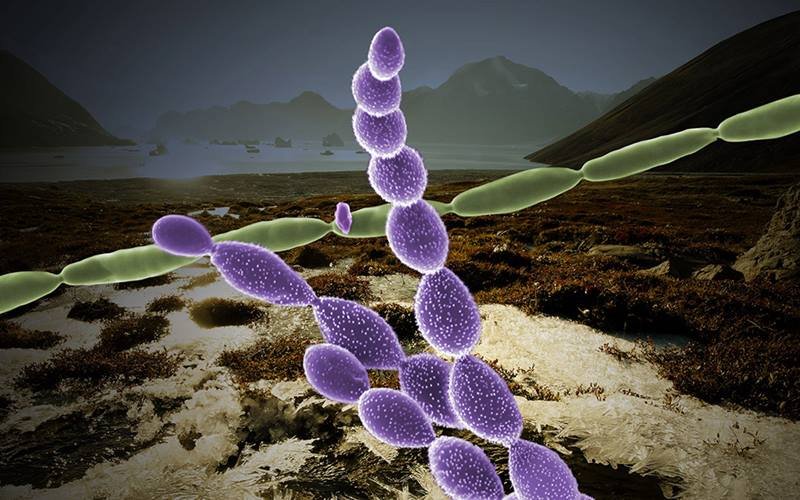 An international team tracked the genomic composition of microbes (purple and green) in thawing permafrost to determine which had the most impact on releases of carbon dioxide and methane to the atmosphere.

Rising temperatures mean permafrost—ground at or below freezing for two or more years—begins thawing, releasing carbon in the form of organic matter. This carbon is gobbled up by microbes in the soil. Microbial activity in turn gives off carbon dioxide and methane. How can we predict how much without understanding more about the microbes involved? An international team of scientists has identified the genomes of more than 1,500 of these microbes and discovered their potential for eating soil carbon.

About 24 percent of the land in the Northern Hemisphere is covered in permafrost. As frozen ground thaws, it may collapse to form bogs or fens whose resident microbes can degrade the formerly frozen soil carbon, as well as new carbon from plant growth. Knowing how the activities of these microbes contribute to carbon dioxide and methane in the atmosphere has been challenging. Why? The microbial community’s complexity and diversity makes it difficult to study. By studying these communities at the genomic level, scientists can not only identify the species present but shed light on how they use and release carbon.

Scientists collected soil samples from Stordalen Mire in northern Sweden, an Arctic peatland ecosystem that is undergoing permafrost thaw, to identify the types of microbes living there. Looking deep into the genomic composition of these microbes, the team determined which types of microbes degraded organic matter into carbon dioxide and methane. The results link changing biogeochemistry to specific microbial types involved in carbon processing, providing key information for predicting the impact of change on permafrost ecosystems. The work expands the number of genomes recovered from microbes in permafrost-associated soils by two orders of magnitude, laying a powerful foundation for future research at this and other rapidly changing sites across the Arctic. The research team crossed not only the United States but international boundaries and included scientists from the University of Queensland (Australia), Stockholm University (Sweden), the University of New Hampshire, Rochester Institute of Technology (New York), Florida State University, The Ohio State University, the University of Arizona, and Pacific Northwest National Laboratory. Through the Facilities Integrating Collaborations for User Science initiative, researchers leveraged the advanced scientific instrumentation and extensive expertise of EMSL, the Environmental Molecular Sciences Laboratory, and JGI, the Joint Genome Institute, both Office of Science user facilities that are sponsored by the Department of Energy Office of Science’s Office of Biological and Environmental Research.