Molecular Sunscreen: How DNA Protects Itself from UV Light 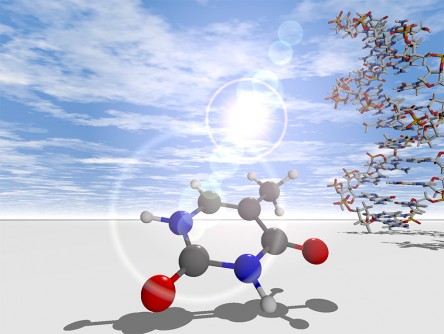 Nucleobases (shown here is thymine) encode genetic information inside DNA. Even isolated nucleobases have a sophisticated mechanism protecting them from the destructive influence of ultraviolet light.

X-rays from the Linac Coherent Light Source were used to measure the ultrafast response of DNA nucleobases to ultraviolet light. Researchers found that the UV excited state in the nucleobase thymine decays rapidly, harmlessly dissipating the potentially destructive UV energy.

The experimental findings give new insight on how the nucleobases inside DNA protect themselves from damage induced by ultraviolet light. In addition, the experimental scheme developed will be useful for probing the ultrafast dynamics of other classes of molecules in biology, chemistry and physics.

Disentangling the underlying ultrafast motion of electrons and nuclei of the photoexcited molecule is challenging using current spectroscopic approaches. Researchers at SLAC approached this problem by investigating how DNA, which absorbs light very strongly, protects itself by dissipating the UV energy as heat instead of breaking the chemical bonds that hold the DNA together. By using an ultrafast x-ray pulse, an innermost electron from a thymine molecule, a so-called core electron, is stripped away, resulting in an atom with a vacancy in its core level, resulting in a “core hole.” The atom, now unstable, fills the core hole with an outer electron, and an electron is emitted via a process known as the Auger effect. Measurement of the kinetic energy of the Auger electrons reveals information about the dynamics. This experimental scheme, called time-resolved Auger spectroscopy, allowed scientists to distinguish between the movement of the atomic nuclei and the changes in the distribution of electrons from an element specific point of view. Using this strategy for the DNA nucleobase thymine, researchers observed that the oxygen Auger spectrum shifts initially toward high kinetic energies due to the stretching of a single carbon-oxygen bond. The Auger spectrum then shifts toward lower kinetic energies within 200 fs to an electronic relaxed state, which allows the UV energy to dissipate as heat rather than damaging the DNA. This newly developed tool should provide a window to view the motions of electrons in many areas of chemistry, biology and physics.