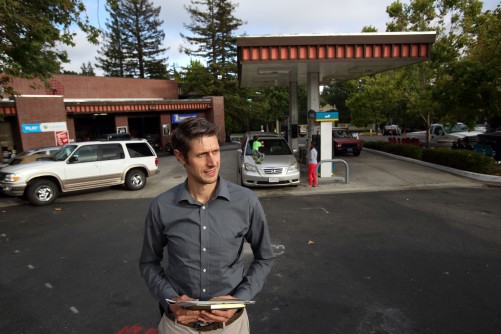 A recent report by Sandia National Laboratories asks whether hydrogen fuel can be accepted at any of the 70 California gas stations involved in the study, based on a new hydrogen technologies code. Here, Sandia’s Daniel Dedrick visits a station in Oakland, Calif.

Newswise — LIVERMORE, Calif. — A study by researchers at Sandia National Laboratories concludes that a number of existing gas stations in California can safely store and dispense hydrogen, suggesting a broader network of hydrogen fueling stations may be within reach.

The report examined 70 commercial gasoline stations in the state of California and sought to determine which, if any, could integrate hydrogen fuel, based on the National Fire Protection Association (NFPA) hydrogen technologies code published in 2011.

The current code, known as NFPA 2, provides fundamental safeguards for the generation, installation, storage, piping, use and handling of hydrogen in compressed gas or cryogenic (low temperature) liquid form.

This work is aligned with Hydrogen Fueling Infrastructure Research and Station Technology (H2FIRST), a new project established by the Department of Energy’s Office of Energy Efficiency and Renewable Energy.

The development of meaningful, science-based fire codes and determinations such as those found in the report will help accelerate the deployment of hydrogen systems, said Daniel Dedrick, hydrogen program manager at Sandia. “This work shows that we can reduce uncertainty and avoid overly conservative restrictions to commercial hydrogen fuel installations by focusing on scientific, risk-informed approaches.

“It turns out that the number of fueling stations able to carry hydrogen can be quantified,” Dedrick added. “We now know that we can build more hydrogen fueling stations if we examine the safety issues within a sound, technical framework that focuses on the real behaviors of hydrogen.”

Sandia’s hydrogen safety, codes and standards program is a diverse portfolio of activities funded by the Department of Energy’s Fuel Cell Technologies Office to provide the technical basis for developing and revising safety codes and standards for hydrogen infrastructure, including the NFPA 2 code.

The study focuses on California, which has more hydrogen-fueling stations than any other state. A key factor in the codes that Sandia examined was the separation distances required for fueling infrastructure, including fuel dispensers, air intakes and tanks and storage equipment. The code defines required distances between such components and public streets, parking, on-site convenience stores and perimeter lines around the site.

All fueling facilities are susceptible to fire due to the presence of flammable liquids and gases, said Dedrick. According to the NFPA, more than 5,000 fires and explosions a year occurred at conventional gasoline stations from 2004-2008. “Whether you are filling your car with gasoline, compressed natural gas or hydrogen fuel, the fueling facility first of all must be designed and operated with safety in mind,” he said.

“If you have a hydrogen leak at a fueling station, for example, and in the event that the hydrogen ignites, we need to understand how that flame is going to behave in order to maintain and control it within a typical fueling station,” explained Chris San Marchi, manager of Sandia’s hydrogen and metallurgy science group. A scientific understanding of how such flames and other potential hazards behave is necessary to properly determine and mitigate safety risks, he said.

“We’re comfortable with the risks of natural gas in our homes and under our streets,” San Marchi pointed out. “We want to be just as confident of the safety of hydrogen in our fuel tanks and on our street corners.”

Sandia researchers at the Combustion Research Facility for years have studied and modeled the intricate workings of the combustion engine and, more recently, hydrogen behavior and its effects on materials and engine components, San Marchi said. The knowledge gained by Sandia’s work on the physical behavior of hydrogen and risks associated with hydrogen fuels provided the scientific basis to revise the separation distances in the NFPA 2 code for hydrogen installations.

Under the previous code, virtually no hydrogen fuel cell stations could be sited at existing stations. The reason, said San Marchi, is simple: Those codes were developed via an “expert opinion-based process” and not the risk-informed process developed by Sandia researchers and now used in the code. The previous code was developed for flammable gases in an industrial setting, which carries different risks compared to hydrogen fuel at a fueling station.

“The distances set forth in the code, therefore, were much larger than we now know they need to be,” San Marchi said. The risk metric used to develop the new NFPA code, he added, was that the stations accepting hydrogen fuel needed to be proven as safe as or safer than gasoline-only stations.

Some gas stations still may not be able to accept hydrogen under the new code because gas station lot sizes vary greatly, and many smaller sites – particularly those in dense, urban areas – cannot be properly configured, he said.

“Certain smaller gas stations, especially those in cities, have unusual shapes that aren’t going to accommodate the right separation distances,” San Marchi said. For example, he said, the required distance between a high-pressure tank carrying hydrogen and the property boundary would be too great for a “skinny” station or a wedge-shaped lot. While larger lots naturally work better in the current environment, San Marchi said, there are opportunities to develop risk mitigations that could allow even wider deployment of hydrogen fueling stations.

One of Sandia’s next objectives is to work with all parties to look closer at the underutilized performance-based parts of the NFPA 2 code, rather than the prescriptive-based elements that focus on rigid distance requirements.

“While the prescriptive sections of the code are typically implemented, there are also sections of the code that allow for the use of more risk analysis to optimize the fueling facility,” San Marchi said. If station developers and others take a more performance-based approach, he said, more existing fueling facilities will be able to integrate hydrogen systems and support the developing fuel-cell electric vehicle market.

Sandia is also in the process of developing a risk-informed approach for shortening the separation distances for liquid hydrogen storage at fueling stations, as current efforts only examined separation distances for gaseous hydrogen. Liquid hydrogen is attractive because it takes up less space than gaseous hydrogen and allows fueling stations to accommodate larger numbers of fuel-cell electric vehicles. However, there are additional issues associated with the low temperatures required for liquid systems installed on small properties.

“We need to do more experimental and modeling work to understand and evaluate the science and physics of liquid hydrogen,” said San Marchi. “By evaluating the risks quantitatively, we believe we can shorten the separation distances required in the code for liquid hydrogen just as we did with gaseous hydrogen. That could then lead to even more fueling stations that can accept hydrogen and support the continued growth of the fuel-cell electric vehicle market.”