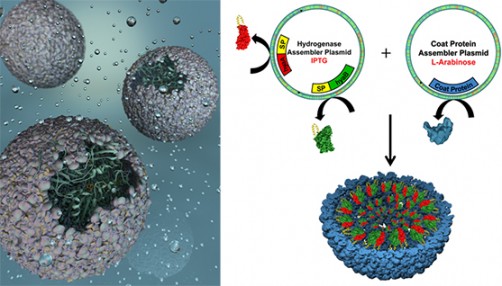 Densely packed, these nanoscale bioreactors convert water to hydrogen. These tiny reactors are based on biological functionality and are synthesized through a process called “directed assembly” in which researchers manipulate the system’s natural growth processes to make a new system. The bioreactors are made of hydrogen-producing enzymes (green) within virus protein shells (gray). Directed assembly resulted in confining the enzymes within the virus shells, which led to a more stable and active hydrogen-forming material.

Scientists built tiny chemical plants, or enzymes, that efficiently produce hydrogen--one half of the "holy grail" of splitting water to make hydrogen to fuel cars. The team was inspired by nature, which contains, localizes, and controls reactions in discrete spaces. The team’s modified enzyme, assembled within a protective virus protein shell, is highly active and more stable than otherwise possible. The tiny chemical reactors represent a new class of bio-inspired materials that are easily and sustainably made at room temperature.

This approach paves the way for a new generation of renewable catalysts inspired and synthesized by biology that have potential for low cost hydrogen fuel production.

Biology assembles and uses discrete spaces such as organelles and protein-based compartments to localize and exquisitely control chemical processes essential for sustaining life. Assembly from multiple protein components creates compartments with well-defined barriers that precisely control access to the interior and dispersal of products to the local environment. The chemistry of these highly evolved protein-based compartments has inspired scientists at Indiana University to design new catalytically active materials that utilize and self-assemble from biological components. The encapsulation and protection of a hydrogen-producing and oxygen-tolerant enzyme catalyst were achieved by sequestering it within an inactivated virus shell (also known as a capsid). Researchers co-opted E. coli cells to produce the material, which allowed for the seamless biomolecular synthesis and assembly of the nanomaterials. They genetically fused the subunits of a hydrogen-producing enzyme to the capsid-forming protein thereby enabling coordinated capsid self-assembly and encapsulation of the enzyme subunits within the capsid. This directed assembly approach resulted in enhanced stabilization of the very fragile and sensitive (to temperature and chemical degradation) enzyme through dense packing of the enzyme subunits within the capsid. Most importantly, the encapsulated enzyme is nearly 150-fold more catalytically active than the purified, free enzyme for converting water to hydrogen that could be used in a fuel cell to generate power.

This work was supported by the DOE Office of Science (Office of Basic Energy Sciences).