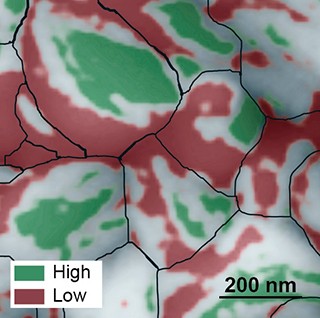 Solar cells made from specialized compounds, with the crystal structure of the mineral perovskite, have captured scientists’ imaginations. The cells are inexpensive and easy to make. Even more intriguing, the efficiency at which perovskite solar cells convert light to electricity has increased more rapidly than any other material to date. By taking a close look at the perovskite, a team at the Molecular Foundry can now differentiate high-performing areas on perovskite solar cells. These areas could lead to record high-efficiency solar cells.

The discovery of these top-performing facets could hold the secret to highly efficient perovskite solar cells. The next step would be to make perovskite that only contained the most efficient facets.

A multidisciplinary team discovered a possible secret to dramatically boosting the efficiency of methylammonium lead iodide perovskite solar cells hidden in the nanoscale peaks and valleys of the crystalline material. The team of scientists from the Molecular Foundry and users at the Joint Center for Artificial Photosynthesis, both at Berkeley Lab, found a surprising characteristic of a perovskite solar cell that could be exploited for even higher efficiencies, possibly up to 31 percent. Using photoconductive atomic force microscopy having nanometer-scale resolution, the scientists mapped two properties on the active layer of the solar cell that relate to its photovoltaic efficiency. The maps revealed a bumpy surface composed of grains about 200 nanometers in length. Each grain has multi-angled facets like the faces of a gemstone.

Unexpectedly, the scientists discovered a huge difference in energy conversion efficiency between facets on individual grains. They found poorly performing facets adjacent to highly efficient facets, with some facets approaching the material’s theoretical energy conversion limit. The scientists say these top-performing facets could hold the secret to highly efficient solar cells if the material can be synthesized so that only very efficient facets develop.

This material is based on work supported by the National Science Foundation Graduate Research Fellowship under grant NSF DGE 1106400 and by the Joint Center for Artificial Photosynthesis, a U.S. Department of Energy (DOE) Energy Innovation Hub, supported through the DOE Office of Science under award DE-SC0004993. L.L. thanks the AvH foundation for financial support through the Feodor-Lynen program. D.Z. acknowledges support by the DOE Office of Science, Small Business Innovation Research and Small Business Technology Transfer Program Office, under award DE-SC0013212. A.W.B., M.M., J.L., and S.Y.L. were supported by a DOE Early Career Grant. Work at the Molecular Foundry was supported by the DOE, Office of Science, Office of Basic Energy Sciences, Scientific User Facilities Division under contract DE-AC02-05CH11231 and user proposal 4233. J.B.N., S.E.R.L., and F.M.T. acknowledge support from the Laboratory Directed Research and Development Program at the Lawrence Berkeley National Laboratory under contract DE-AC02-05CH11231.