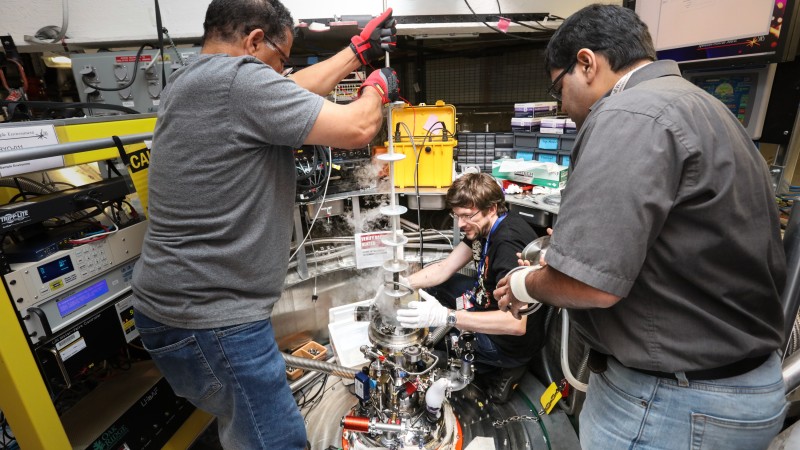 Newswise — The ice we blend into our frozen drinks is a complicated compound, riddled with strange molecular inconsistencies scientists still struggle to understand. Exploring the physics behind the odd microstructure of water-ice may help us learn more about other seemingly unrelated advanced materials and their quantum states.

That’s why Jonathan Morris, an assistant professor of physics at Xavier University, and Joseph Lanier, an undergraduate student researcher, are working with postdoctoral research assistant Anjana Samarakoon at the Department of Energy’s (DOE’s) Oak Ridge National Laboratory (ORNL) to probe a single crystal of frozen water. Specifically, the team wants to learn more about ionic defects, mysterious molecular anomalies that sometimes appear in the otherwise crystalline structure of ice. If they can figure out how much energy it takes to produce these ionic defects, they may be able to use that information to create models for understanding similar inconsistencies found in the molecular structures of other materials.

“We want to establish a better understanding of the fundamental physics dictating water-ice’s behavior, and then hopefully use that knowledge to learn more about other compounds and states of matter,” said Morris.

Generally, ice behaves according to a set of guidelines called the Bernal-Fowler Rules (also known as the Ice Rules), which can usually predict how molecules in frozen water will behave. For example, the Bernal-Fowler Rules state that in between any two oxygen atoms, there will be one hydrogen atom, and around any one oxygen atom, there will be two hydrogen atoms. But actual ice isn’t always so organized. Sometimes, water molecules in ice misbehave, gaining or losing hydrogen atoms to become unique ions unlike any of their neighboring water molecules.

“Instead of two hydrogens next to an individual oxygen atom, you might end up with three, which creates a H3O+ ion, or you could end up with only one hydrogen next to an oxygen, which would be an OH- ion. These defects break the ice rules locally, and we’d like to understand how and why they do this,” said Samarakoon.

Morris explains that learning more about these ionic defects would help researchers better understand the fundamental physics dictating how ice melts and responds to electric fields. It could also shed light on materials that exhibit quantum behaviors—such as quantum spin-ice candidates—which have spin arrangements analog to the hydrogen atoms in water ice.

“On the one hand, we’re really interested in learning more about ice specifically because there’s a lot we don’t know about its microstructure. But we’re also interested in ice because the kinds of inconsistencies we see in its molecular structure are very similar to defects we find in other materials, including some quantum states,” said Morris.

“We used heavy water, D2O, because its deuterium atoms feature an extra neutron in their nuclei compared to regular hydrogen, which makes it easier to observe with neutron scattering than H2O. And because heavy water and regular water have similar atomic structures, we can use what we learn about heavy-water ice to build hypotheses about regular water-ice,” said Morris.

Collaborators at Helmholz-Zentrum in Berlin produced the crystal, which meant it had to be shipped cold all the way from Germany to Oak Ridge. Morris and his team had to take special precautions to make sure it didn’t melt mid-flight.

“Getting that sample of deuterium ice all the way to Oak Ridge was quite challenging. We had to keep it stored in a dry-ice container and ship it with a special air service to make sure it wasn’t accidentally destroyed during its journey. We’re very happy with how successful we were and how helpful everyone at ORNL has been during this process,” said Morris.

Neutrons are perfect for this experiment. They are deeply penetrating, allowing Morris and his team to both construct a complete survey of the ice crystal’s internal microstructure and track the energy signatures of frozen water molecules vibrating within the ice. The CORELLI instrument at SNS is especially useful for this experiment because it allows Morris to focus specifically on elastic scattering events, in which neutrons are scattered by the atoms of a sample without losing or gaining any energy. Then, he can use the nearby ARCS instrument to measure dynamic behavior, which perfectly complements the static data he and his team get from CORELLI.

“Elastic scattering events are really important for locating and studying ionic defects in ice. SNS is unique because we can not only separate elastic- from inelastic- scattering data with CORELLI, but we can also verify those results using ARCS. This makes performing our experiment so much easier,” said Morris.

Morris, Lanier, and Samarakoon hope that the information they gather from these experiments will not only help scientists better understand water-ice but also contribute to a better understanding of other materials.

“Ice is a fascinating material, and what we learn about its ionic defects here at ORNL could help us make a meaningful contribution to material science as a whole,” said Lanier.