Enhanced stability in the presence of water could help reduce smokestack emissions of greenhouse gases. 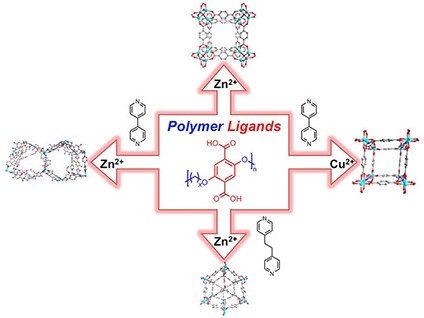 By combining different metal atoms (for example zinc, Zn, or copper, Cu) with the molecular polymer chains (or ligands), scientists can control the resulting structure. By controlling the structure, scientists can design a structure that can separate mixed gases (for example, trapping carbon dioxide and not nitrogen).

Newswise — Heat and humidity can harm materials. The conditions inside smokestacks often damage materials that could remove carbon dioxide. This is especially true for metal-organic frameworks (MOFs), which remove carbon dioxide under milder conditions. To clean up the waste gases generated by industrial processes and in making energy, scientists created a new hybrid material. They combined polymers with metal ions to create an open, spongy material. The result, referred to as a polyMOF, is more stable than traditional MOFs. It also has an affinity for some gases, including carbon dioxide.

Researchers developed a new class of porous materials that have the potential to combine the best properties of inorganic solids and flexible, processable polymers. These materials are termed polyMOFs (for polymer+metal-organic frameworks). Researchers at the University of California, San Diego, in collaboration with researchers at the University of Florida, discovered that certain polymers could be coaxed into forming porous, 3-D solids. The new material is analogous to traditional metal-organic frameworks that are formed with small molecule linkers coordinated to metal atoms. Additional studies, performed with researchers at the U.S. Army, found that these polyMOFs are quite stable under environmental conditions (for example, moisture). Traditional metal-organic frameworks are often not stable under such conditions. The results establish that these new polyMOF materials may overcome the shortcomings of traditional MOF materials. PolyMOFs can potentially serve as materials for the separation of carbon dioxide from other gases, such as methane and nitrogen. Thus, these new materials could help solve important problems in the energy technology sector, such as carbon dioxide trapping and sequestration.