New Function for Plant Enzyme Could Lead to Green Chemistry 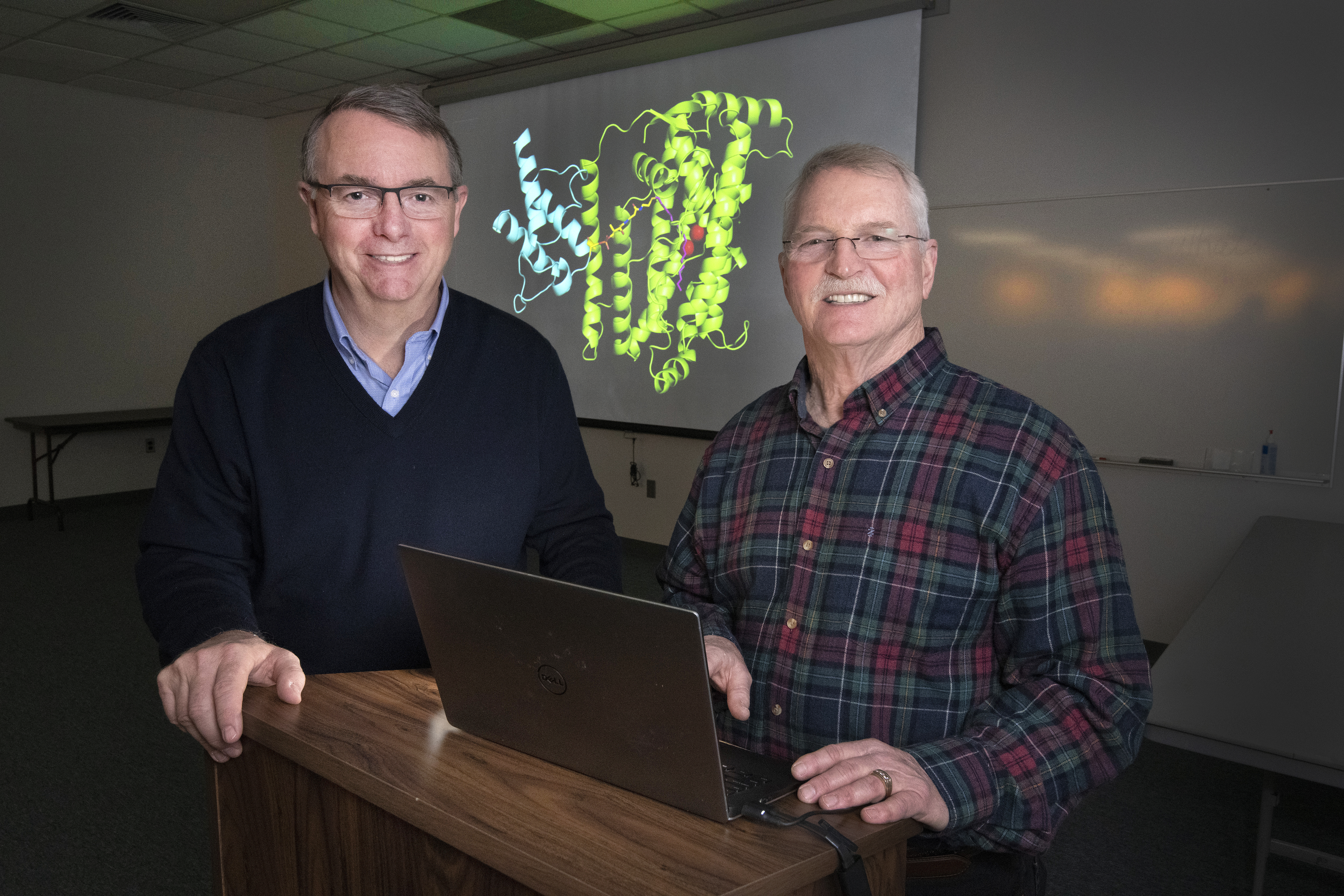 Brookhaven Lab biochemist John Shanklin with retired biology associate Ed Whittle displaying a structural image of a desaturase enzyme that introduces adjacent hydroxyl groups into a fatty acid. This fatty acid can be used to synthesize a wide range of organic molecules, so the discovery of the plant enzyme may inspire the development of new "greener" industrial catalysts.

Newswise — UPTON, NY—Scientists at the U.S. Department of Energy’s Brookhaven National Laboratory have discovered a new function in a plant enzyme that could have implications for the design of new chemical catalysts. The enzyme catalyzes, or initiates, one of the cornerstone chemical reactions needed to synthesize a wide array of organic molecules, including those found in lubricants, cosmetics, and those used as raw materials for making plastics.

“This enzyme could inspire a new form of ‘green’ chemistry,” said Brookhaven Lab biochemist John Shanklin, who led the research. “Maybe we can adapt this biomolecule to make useful chemicals in plants, or use it as the basis for designing new bio-inspired catalysts to replace more expensive, toxic catalysts currently in use.”

Shanklin and his team published a paper describing the research in the journal Plant Physiology.

The team made the discovery in the course of their ongoing research into enzymes that desaturate plant oils. These desaturase enzymes strip hydrogen atoms off specific adjacent carbon atoms in a hydrocarbon chain and insert a double bond between those carbon atoms. Shanklin’s group had previously created a triple mutant version of a desaturase enzyme with interesting properties, and they were studying the three mutations separately to see what each one did.

Two of the single mutant enzymes turned out to remove the double bond between adjacent carbon atoms and added an “OH” (hydroxyl group) to each carbon to produce a fatty acid with two adjacent hydroxyl groups.

Fatty acids containing such adjacent OH groups, known as diols, are important chemical components for making lubricants, like those that keep hot engines running smoothly. They can also be converted to building blocks for making plastics or other commodity products.

“Diols are really important industrial chemicals but making them artificially in the lab is quite problematic,” Shanklin said.

The best industrial catalysts for this reaction are expensive, highly volatile, and toxic, he noted.

Another problem is that there are distinct forms of diols, and it’s hard for chemists to make a single pure form.

“The enzyme mutants we discovered naturally make a single form, so it’s ready to use without further processing or waste,” Shanklin said.

Tracing the origins of the oxygen atoms in the two OH groups revealed that both came from the same oxygen molecule (O2). The ability to transfer both oxygen atoms from a single O2 molecule during a reaction, known as “dioxygenase” chemistry, was something of a surprise for a “diiron” enzyme (one with two iron atoms in its active site).

“Dioxygenase chemistry has not previously been reported for diiron enzymes,” Shanklin said. “We had to perform some technically challenging experiments to provide incontrovertible proof that this was indeed happening, and without Ed Whittle’s creativity and tenacity, we wouldn’t have completed this study.”

Whittle, the lead author on the paper (now retired from Brookhaven Lab), has diligently worked on this project over a period of years in Shanklin’s lab to nail down this important new discovery.

The team’s next goal is to obtain a crystal structure of this enzyme using x-rays at the National Synchrotron Light Source II (NSLS-II)—a DOE Office of Science user facility at Brookhaven Lab.

“We’ll share that structural information with our computational chemistry colleagues to figure out the details of how this unprecedented chemistry can occur with this class of catalyst.”

That work could help the team learn how to control the configuration of lab-made catalysts to mimic the plant-derived version.

“If we can incorporate what we’ve learned into the design of industrial catalysts, those reactions could produce purer products with less waste and avoid using toxic chemicals,” Shanklin said.