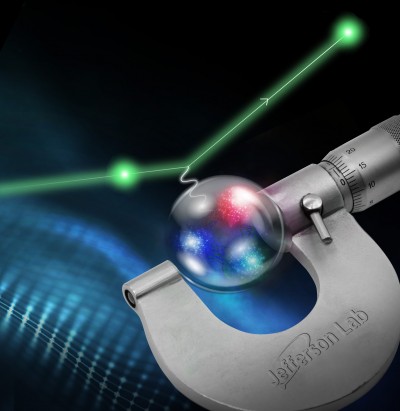 Physicists get closer to solving the proton radius puzzle with unique new measurement of the charge radius of the proton.

Newswise — NEWPORT NEWS, VA – Using the first new method in half a century for measuring the size of the proton via electron scattering, the PRad collaboration has produced a new value for the proton’s radius in an experiment conducted at the Department of Energy’s Thomas Jefferson National Accelerator Facility.

The result, recently published in the journal Nature, is one of the most precise measured from electron-scattering experiments. The new value for the proton radius that was obtained is 0.831 fm, which is smaller than the previous electron-scattering value of 0.88 fm and is in agreement with recent muonic atomic spectroscopy results.

“We are happy that years of hard work of our collaboration is coming to an end with a good result that will help critically toward solution of the so-called proton radius puzzle,” says Ashot Gasparian, a professor at North Carolina A&T State University and the experiment’s spokesperson.

All visible matter in the universe is built on a cloud of three quarks bound together with strong force energy. The ubiquitous proton, which sits at the heart of every atom, has been the subject of numerous studies and experiments aimed at revealing its secrets. Yet, an unexpected result from an experiment to measure the size of this cloud, in terms of its root-mean-square charge radius, has united atomic and nuclear physicists in a flurry of activity to re-examine this basic quantity of the proton.

Prior to 2010, the most precise measurements of the proton’s radius came from two different experimental methods. In electron-scattering experiments, electrons are shot at the protons, and the proton’s charge radius is determined by the change in path of the electrons after they bounce off, or scatter from, the proton. In atomic spectroscopy measurements, the transitions between energy levels by electrons are observed (in the form of photons that are given off by the electrons) as they orbit a small nucleus. Nuclei that have typically been observed include hydrogen (with one proton) or deuterium (with a proton and a neutron). These two different methods yielded a radius of about 0.88 femtometers.

In 2010, atomic physicists announced results from a new method. They measured the transition between energy levels of electrons in orbit around lab-made hydrogen atoms that replaced an orbiting electron with a muon, which orbits much closer to the proton and is more sensitive to the proton’s charge radius. This result yielded a value that was 4% smaller than before, at about 0.84 femtometers.

In 2012, a collaboration of scientists led by Gasparian came together at Jefferson Lab to revamp electron-scattering methods in hopes of producing a novel and more precise measurement of the proton’s charge radius. The PRad experiment was given priority scheduling as one of the first experiments to take data and complete its run following an upgrade of the Continuous Electron Beam Accelerator Facility, a DOE User Facility for nuclear physics research. The experiment took electron-scattering data in Jefferson Lab’s Experimental Hall B in 2016.

The collaboration instituted three new techniques to improve the precision of the new measurement. The first was implementation of a new type of windowless target system, which was funded by a National Science Foundation Major Research Instrumentation grant and was largely developed, fabricated and operated by Jefferson Lab’s Target group.

The windowless target flowed refrigerated hydrogen gas directly into the stream of CEBAF’s 1.1 and 2.2 GeV accelerated electrons and allowed scattered electrons to move nearly unimpeded into the detectors.

“When we say windowless, we are saying that the tube is open to the vacuum of the accelerator. Which seems like a window - but in electron-scattering, a window is a metal cover on the end of the tube, and those have been removed,” says Dipangkar Dutta, an experiment co-spokesperson and a professor at Mississippi State University.

“So this is the first time that people actually put a gas-flow target onto the beamline at Jefferson Lab,” says Haiyan Gao, an experiment co-spokesperson and Henry Newson professor at Duke University. “The vacuum was good, so that we could have electron beam going through our target to do the experiment, and we actually have a hole in the entrance foil and another in the exit foil. Essentially, the beam just passed through directly to the hydrogen gas, not seeing any window.”

The next major difference was the use of a calorimeter rather than the traditionally used magnetic spectrometer to detect scattered electrons resulting from the incoming electrons striking the hydrogen’s protons or electrons. The repurposed hybrid calorimeter HyCal measured the energies and positions of the scattered electrons, while a newly built gas electron multiplier, the GEM detector, also detected the electrons’ positions with even higher accuracy.

The last major improvement was placement of these detectors extremely close in angular distance from where the electron beam struck the hydrogen target. The collaboration was able to get that distance down to less than one degree.

“In electron scattering, in order to extract the radius, we have to go to as small a scattering angle as possible,” says Dutta. “To get the proton radius, you need to extrapolate to zero angle, which you cannot access in an experiment. So, the closer to zero you can get, the better.”

“The region that we explored is at such a forward angle and at such small four-momentum transfer squared that it has never been reached before in electron-proton scattering,” adds Mahbub Khandaker, an experiment co-spokesperson and a professor at Idaho State University.

The collaborators say the result is unique, because it used a new technique via electron-scattering to determine the proton charge radius. Now, they are looking forward to comparing the result to new spectroscopic determinations of the proton radius and upcoming electron- and muon-scattering measurements that are being conducted worldwide.

Further, this result also sheds new light on conjecture of a new force of nature that was proposed when the proton radius puzzle first surfaced.

“When the initial proton radius puzzle came out in 2010, there was hope in the community that maybe we have found a fifth force of nature, that this force acts differently between electrons and muons,” says Dutta. “But the PRad experiment seems to shut the door on that possibility.”

They say the next step is to consider conducting further investigations using this new experimental method to achieve even higher precision measurements on this and related topics, such as the radius of the deuteron, the nucleus of deuterium.

“There is a very good chance we can improve our measurements by a factor of two or maybe even more,” Gao says.