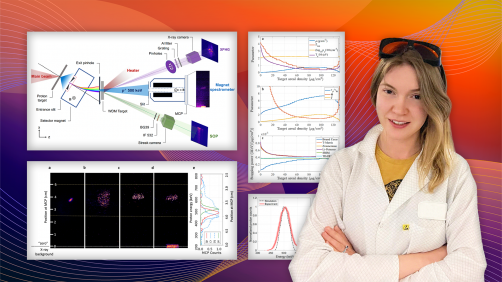 Physicist Sophia Malko with figures from her ion-stopping paper.

Newswise — An international team of scientists has uncovered a new method for advancing the development of fusion energy through increased understanding of the properties of warm dense matter, an extreme state of matter similar to that found at the heart of giant planets like Jupiter. The findings, led by Sophia Malko of the U.S. Department of Energy’s (DOE) Princeton Plasma Physics Laboratory (PPPL), detail a new technique to measure the “stopping power” of nuclear particles in plasma using high repetition-rate ultraintense lasers. The understanding of proton stopping power is particularly important for inertial confinement fusion (ICF).

Powering the sun and stars

This process contrasts with the creation of fusion at PPPL, which heats plasma to million-degree temperatures in magnetic confinement facilities. Plasma, the hot, charged state of matter composed of free electrons and atomic nuclei, or ions, fuels fusion reactions in both types of research, which aim to reproduce on Earth the fusion that powers the sun and stars as a source of safe, clean and virtually limitless energy to generate the world’s electricity.

“Stopping power” is a force acting on charged particles due to collisions with electrons in the matter that result in energy loss. “For example, if you don’t know the proton stopping power you cannot calculate the amount of energy deposited in the plasma and hence design lasers with the right energy level to create fusion ignition,” said Malko, lead author of a paper that outlines the findings in Nature Communications. “Theoretical descriptions of the stopping power in high-energy density matter and particularly in warm dense matter are difficult, and measurements are largely missing,” she said. “Our paper compares experimental data of the loss of proton energy in warm dense matter with theoretical models of stopping power.”

The Nature Communications research investigated proton stopping power in a largely unexplored regime by using low-energy ion beams and laser-produced warm dense plasmas. To produce the low-energy ions, researchers used a special magnet-based device that selects the low-energy fixed energy system from a broad proton spectrum generated by the interaction of lasers and plasma. The selected beam then passes through laser-driven warm dense matter and its energy loss is measured. Theoretical comparison with experimental data showed that the closest match sharply disagreed with classical models.

Instead, the closest agreement came from recently developed first-principle simulations based on a many-body, or interacting, quantum mechanical approach, Malko said.

Precise stopping measurements can also advance understanding of how protons produce what is known as fast ignition, an advanced scheme of inertial confinement fusion. “In proton-driven fast ignition, where protons must heat compressed fuel from very low temperature states to high temperature, the proton stopping power and the material state are tightly coupled,” Malko said.

Malko and her team are performing new experiments at the DOE LaserNetUS facilities at Colorado State University to extend their measurements to the so-called Bragg peak region, where the maximum energy loss occurs and where theoretical predictions are most uncertain.

Coauthors of this paper included 27 researchers from the U.S., Spain, France, Germany, Canada and Italy.

Support for this work comes from the DOE National Nuclear Security Administration together with the Laboratory Directed Research and Development program of Los Alamos National Laboratory (LANL) and from European and Spanish ministries. Experiments were conducted on the VEGA II laser facility in Spain with the German GSI Target Laboratory preparing and delivering sample targets. Computing was provided by the LANL Institutional Computing and Advanced Scientific Computing programs.