A low-cost, stable oxide film is highly conductive and transparent, rivaling its predecessors. 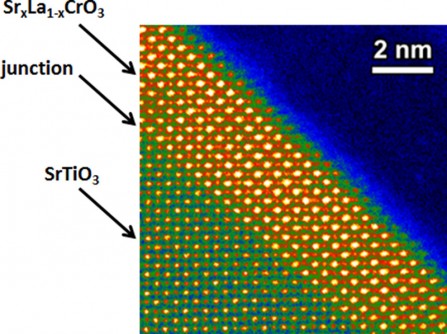 When light is absorbed by solar cells to make electricity, electrons and “missing electrons” are generated that move through the layers of materials in typical solar cells. This new material conducts the missing electrons, while being transparent and stable. In the high magnification colorized image of atomic structure in multiple layers typical for a solar cell, the junction of a layer of the transparent hole-conducting material (primarily yellow) with an electron-conducting layer (primarily green) is shown.

Numerous applications from flat panel displays to solar cells require high-performance transparent conducting oxides. Commercial applications mainly use transparent oxides that conduct electrons. Their counterparts, transparent oxides that conduct “missing electrons” called holes, have not been commercialized due to their low conductivity. Conductivity and transparency were considered to be typically mutually exclusive properties. Now researchers at the Pacific Northwest National Laboratory (Washington State) along with collaborators at Binghamton University (New York) and the Paul Drude Institute (Berlin) have made a new material that conducts holes, while maintaining much of its transparency. The new material with a special perovskite structure efficiently conducts holes and maintains most of its transparency. The material is made by chemically substituting strontium for up to 25 percent of the lanthanum in lanthanum chromium oxide. To demonstrate the potential of this new material, crystalline films were grown on strontium titanate by a process called molecular beam epitaxy. When light was absorbed in this two-layered film, electrons and holes were generated. The electrons moved into the strontium titanate layer, while the holes moved into the new material. This new transparent film has “hole-conductivity” that is competitive with the best known hole-conducting transparent oxides. Based on its structural and chemical compatibility, this new material offers great promise for integration into and enhanced performance of electronics based only on perovskite oxides. These oxide electronics require positively charged and negatively charged materials to be put in contact with each other. With this new material, both layers can have compatible structures called perovskites. Examples of oxide electronics include high-power devices and sensors.