These enhanced tools will accelerate gene discovery and characterization, vital for new forms of fuel production. 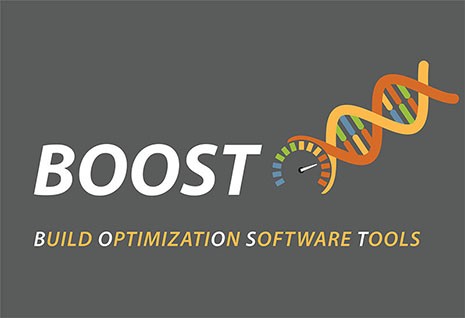 Image courtesy of the Department of Energy’s Joint Genome Institute

To create better fuels, scientists often turn to plants, bacteria, and other natural factories. A vital part of that research is synthetic DNA, which enables scientists to expand the breadth and depth of their genomic research into these natural factories. In a recent study, researchers developed a suite of build optimization software tools (BOOST) to streamline creating such DNA. BOOST automatically detects “difficult” sequences of DNA building blocks and redesigns them for DNA synthesis. BOOST addresses DNA sequences with certain problematic characteristics (for example, extreme guanine-cytosine content) that decrease the success rate of DNA synthesis.

BOOST improves the design and manufacture of synthetic DNA. Using it, scientists can accelerate gene discovery and gene characterization toward practical applications. For example, they can use it to find new options for lower cost, more efficient fuel production.

The ability to design and manufacture synthetic DNA has opened tremendous possibilities in genomic research. In addition to providing access to samples that are difficult to find in nature (as well as crafting genomic sequences not known to occur in the natural world), manufacturing DNA enables scientists to test any sequence in a wide variety of contexts and environments. Biological computer-aided design and manufacture software tools help researchers design sequences that can be critical to discovering new solutions for energy and the environment. So far, however, the software has not been able to automatically fix problematic sequences, slowing down the transition from the design to the manufacturing process and delaying the synthesis of designed DNA.

To solve this problem, researchers at the U.S. Department of Energy’s (DOE) Joint Genome Institute, a DOE Office of Science user facility, developed the BOOST suite to automate the synthetic DNA design process — and do away with the trial-and-error process scientists currently utilize to determine a sequence that can be synthesized.

The new suite of tools is available as a web application, an executable JAVA Archive, and as a representational state transfer application program interface. Ultimately, BOOST will accelerate the use of synthetic DNAs to explore gene functions relevant to DOE’s energy and environmental missions.

The U.S. Department of Energy (DOE), Office of Science, Office of Biological and Environmental Research funded this research. The work was done using resources at the DOE Joint Genome Institute.