Scientists start studying the structure of exotic hadrons by looking how they interact with nearby particles. 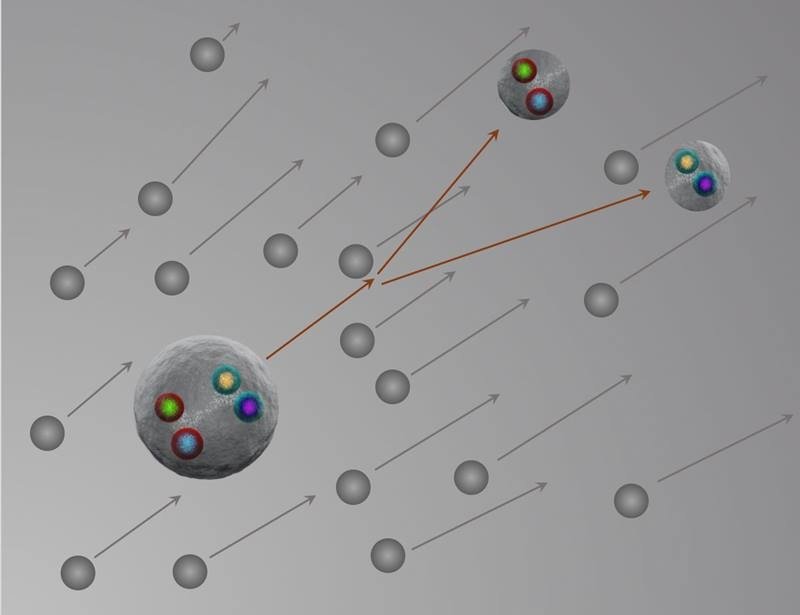 Tetraquark illustration is courtesy of CERN.

Artistic depiction of a tetraquark (composed of four quarks) being broken into comoving particles (each composed of two quarks).

When the quark model was formulated in the 1960s by Murray Gell-Mann and George Zweig, they predicted that mesons (two-quark hadrons) and baryons (three-quark hadrons) would not be the only hadrons in nature. Exploring exotic hadrons with a larger number of quarks is an exciting field in nuclear and particle physics. It took nearly 40 years until scientists discovered the first tetraquark (four-quark hadron), the χc1(3872). Scientists have discovered other tetraquarks and even pentaquarks since then. However, scientists still don’t know how these exotic particles are structured—are they tightly bound hadrons or a compound of two hadrons similar to molecules?

Scientists working on the LHCb experiment at CERN developed a new technique to identify the nature of the χc1(3872). The technique uses its interaction with nearby particles. If it is a molecule, the χc1(3872) would break much more easily than if it is a tightly bound tetraquark when interacting with surrounding particles. The comparison between the observed behavior and a model calculation concluded that the χc1(3872) behaves as expected for a tightly bound tetraquark. This means that scientists have for the first time discovered the structure of a particle by observing how it interacts with nearby particles.

The LHCb (Large Hadron Collider beauty) experiment investigates what happened after the Big Bang that allowed matter to survive and build the Universe. The research team from Los Alamos National Laboratory along with LHCb collaborators and theorists have shown that the enigmatic χc1(3872) particle interacts with other particles in ways expected for a four-quark compact state. The technique developed in this study opens a new field of research, where hadron composition and structure can be determined by studying their interactions with nearby particles. The LANL team is planning to use this technique to study other hadrons with unknown structure.

This research is funded by the Department of Energy Office of Science, Office of Nuclear Physics.