Discovery of a new enzyme system sheds further light on a microbe’s ability to efficiently break down inedible plant matter for conversion to biofuels and biobased chemicals. 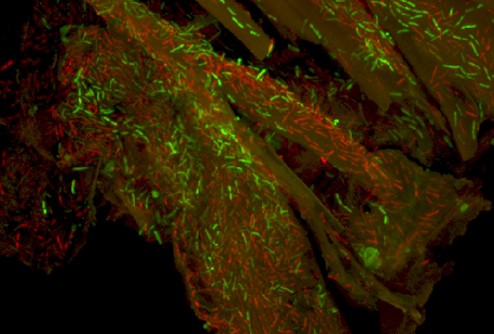 Newswise — Producing fuels from plants and other renewable sources requires breaking down the chemical cellulose; a major candidate to drive, or catalyze, this stubborn chemical is a ubiquitous microorganism called Clostridium thermocellum that works well in hot environments without oxygen. Researchers found that C. thermocellum uses a previously unknown mechanism to degrade cellulose, in addition to other known degradation mechanisms.

Lignocellulosic biomass is the largest source of organic matter on Earth, making it a promising renewable feedstock for producing biofuels and chemicals. Currently, however, the main bottleneck in biofuel production is the low efficiency of cellulose conversion, which leads to high production costs. To date, C. thermocellum is the most efficient microorganism known for solubilizing lignocellulosic biomass. Its high cellulose digestion capability has been attributed to the organism’s efficient cellulases consisting of both a free enzyme system and a tethered cellulosomal system, where multiple carbohydrate active enzymes are organized by primary and secondary scaffolding proteins to generate large protein complexes attached to the bacterial cell wall. Recently, U.S. Department of Energy BioEnergy Science Center (BESC) researchers discovered that C. thermocellum also expresses a type of cellulosomal system that is not bound to the cell wall, a “cell‐free” cellulosomal system. Researchers believe the cell‐free cellulosome complex functions as a “long-range” cellulosome because it can diffuse away from the cell and degrade polysaccharide substrates distant from the bacterial cells. This discovery reveals that C. thermocellum utilizes not only all the previously known cellulase degradation mechanisms (cellulosomes and free enzymes), but also a new category of scaffolded enzymes not attached to the cell. This unexpected finding explains C. thermocellum’s superior performance on biomass, demonstrating that nature’s strategies for biomass conversion are not yet fully understood and could provide further opportunities for microbial enzyme discovery and engineering efforts.