‘No Cost’ Way to Improve Neutron Scattering Resolution by 500 Percent

Animation of the "no cost" computational technique used to improve the effective resolution of a neutron scattering instrument by 500 percent. 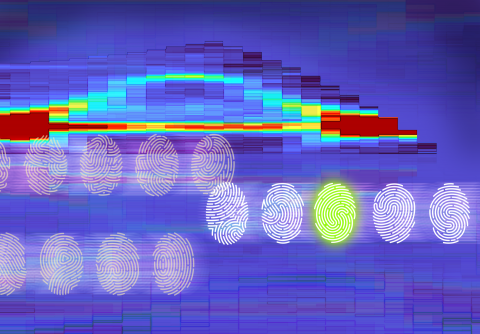 ORNL scientists developed a computational technique that improves the resolution of neutron instruments by 500 percent. This solution comes at virtually no cost since it requires no additional hardware and uses open source software.

Newswise — Scientists pushing the limits of the world’s most advanced neutron scattering instruments know that a small amount of distortion in their measurements is inevitable. For some experiments, this distortion is easily accounted for, but in other types of research it can cause inaccurate findings.

Why does a small amount of distortion matter? It’s similar to when a detective lifts a fingerprint from a glass of water. The curvature of the glass distorts the fingerprint slightly, making it difficult to match the print to a suspect’s fingerprint on file. In such a case, it would be helpful if there was a way to remove the distortion from the fingerprint found on the glass.

Something like this occurred when scientists from Oak Ridge National Laboratory (ORNL) used the world-class SEQUOIA neutron scattering spectrometer at ORNL’s Spallation Neutron Source (SNS). The researchers were measuring spin wave dispersions from a magnetic crystalline material. They discovered that the data (the fingerprint) obtained from SEQUOIA (the glass) was slightly distorted by the resolution limits of the instrument, despite its state-of-the-art design.

To resolve the issue, the researchers developed a new computational technique that improved SEQUOIA’s effective resolution by 500 percent in order to match the data to known spin wave dispersion values. Plus, this solution comes at virtually no cost since it requires no additional hardware and uses open source software.

The results of their efforts, titled, A super-resolution technique to analyze single-crystal inelastic neutron scattering measurements using direct-geometry chopper spectrometers, were published in the AIP journal Review of Scientific Intruments.

“We predicted that if we could measure the amount of distortion inherent in SEQUOIA’s data collection, we could then apply a correction that would increase the instrument’s effective resolution,” said Jiao Lin, lead instrument development scientist for the CUPI2D instrument at the Second Target Station (STS). “It’s similar to how eye doctors evaluate your eyesight and then prescribe corrective eyeglasses or contact lenses to compensate for the distortion in your vision.”

Unlike eye doctors who only test in three dimensions, the scientists needed to measure SEQUOIA’s distortion over four dimensions. This made the task many times more challenging. Fortunately, the researchers had access to ORNL’s MCViNE open source software, which can be used to emulate neutron experiments for spin waves measured by neutron instruments like SEQUOIA. The team believed they could apply the software in a different way to obtain 4D measurements of the distortion.

“To simplify the 4D measurements, we used MCViNE software to make 2D measurements along two axes at a time. We did that for both the distorted experimental image and the high-resolution idealized model we developed,” said Matt Stone, lead SEQUOIA instrument scientist at the SNS. “We then repeated the 2D measurements along many other axes and interpolated the results to approximate a 4D model. In this way we were able to measure the disparities between the actual image and our model.”

The team adapted a computational stereo vision technology that is comparable to how 3D glasses create the illusion of depth in movies. They could visualize the distortion along the various axes of the model one slice at a time and compensate for distortions in their original measurements. The super-resolution technique achieved as much as a 5 times better resolution than previous methods.

“Once we identified the amount and position of distortion in the data versus the idealized model, we were able to apply corrections to the data,” said Gabriele Sala, lead instrument scientist of the STS CHESS beamline. “We then used the corrected data set to generate a much more accurate spin wave dispersion that matched one of the known possible models.”

The researchers are confident that the same super-resolution approach can be applied to other neutron instruments and experiments. “This technique can be used in a wide range of experimental applications,” said Lin.

For even greater resolution and accuracy, the team thinks it will be possible to update the 2D resolution technique to directly resolve 4D measurements. This could also remove the single-dispersion limitation.

The project was supported in part by ORNL’s Laboratory Directed Research and Development SEED funding.

The Spallation Neutron Source is a DOE Office of Science user facility. UT-Battelle LLC manages ORNL for DOE’s Office of Science. The Office of Science is the single largest supporter of basic research in the physical sciences in the United States and is working to address some of the most pressing challenges of our time. For more information, please visit https://energy.gov/science.