Nothing Boring About the Thinnest Boron Ever

Researchers made a sheet of boron only one atom thick with the potential to change solar panels, computers, and more. 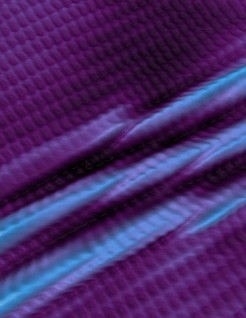 Two-dimensional materials are increasingly important for a wide range of technologies from electronics to energy conversion devices. For the first time, researchers synthesized a thin sheet of boron, or “borophene,” only one atom thick. The image shows an atomic-resolution scanning tunneling microscope image of borophene. The center stripes are from buckling of the sheet to reduce strain.

To revolutionize devices such as solar cells and supercomputers, scientists want mechanically and chemically robust, strong materials that also conduct. A team pushed the envelope on such materials by creating a single layer of boron atoms. Thin, flat layers of materials are typically grown on a surface, or substrate, to support the structure during the growth process. The team predicted the structure of the boron sheet for an assortment of metal substrates. Each substrate resulted in a slightly different atomic arrangement for the boron layer. Guided by this predictive modelling, the team successfully grew the lightest layer of materials to date – a single layer of boron that was on a silver substrate.

Solar panels, computers, and other devices would benefit from new materials. Scientists can change boron’s electronic, magnetic, photonic, and mechanical properties. They do so by growing the boron on different surfaces. The metallic form of the boron layer is known as borophene. This strong, lightweight material will greatly influence a variety of devices.

Boron is widely known as an element with unique chemistry, often in regards to the octet rule. However, boron is also of great interest to many scientists because of its neighbor on the periodic table, carbon. Carbon has been studied by material scientists due to its ability to form a 2-D lattice, or monolayer, graphene. Graphene has many unusual properties, such as a high tensile strength and the ability to efficiently conduct electricity, which makes it relevant in many types of electronic and material fields. The breakthroughs with graphene, culminating in a Nobel Prize in Physics in 2010, have led researchers to ask the following question: Can boron, which is adjacent to carbon on the Periodic Table, also form a 2-D material and, if so, what are its properties? Researchers at Rice University used theory and simulation techniques to identify possible 2-D boron structures. Their findings showed that, based upon the metal substrate used during the fabrication process, the structure of monolayer boron changed drastically. Using this information, researchers from Argonne National Laboratory, Northwestern University, and their collaborators from other institutions utilized the Department of Energy’s Center for Nanoscale Material, a user facility, to attempt the synthesis of borophene on a silver substrate. Through the use of molecular beam epitaxy, the research group synthesized a material and confirmed with microscopy that it was indeed borophene. Upon testing of the new material, the team found that the borophene had metallic characteristics that differ from those of the semi-metal characteristics of graphene. Furthermore, theoretical predictions in this research indicate the material possesses a tensile strength rivaling that of graphene. Thus, borophene may be the first 2-D material to ever possess this particular combination of properties. Given this discovery, borophene should find use in devices encompassing a broad number of applications while serving to improve energy conversion and storage.

U.S. Department of Energy, Office of Science, Basic Energy Sciences supported the theory research (published in Angew. Chem. Int. Ed.), the experimental work (published in Science on the synthesis, scanning tunneling microscopy and Auger), and the research at the Center for Nanoscale Materials, an Office of Science user facility. Other aspects were supported by the NUANCE Center (x-ray photoelectron spectroscopy (XPS)), funded by the National Science Foundation (NSF), the Keck Foundation, the State of Illinois, and Northwestern University; the Office of Naval Research (XPS); the National Institutes of Health (electron microscopy); the NSF; the Welch Foundation; and the Department of Defense. Computational modeling was supported by the National Science Foundation of China, the National 973 Program of China, the Program for New Century Excellent Talents in University (China), the National Council of Science and Technology (Mexico), the Government of Russian Federation, and Defense Advanced Research Projects Agency. Graduate student fellowships were supported by the NSF.