A large-scale soil project uncovered genetic information from bacteria with the capacity to make specialized molecules that could lead to new pharmaceuticals. 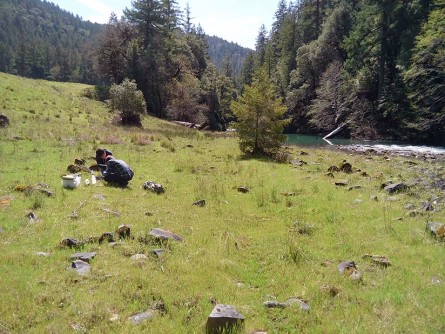 Researchers working in the Angelo Coast Range Reserve, California, sequenced the DNA of soil-dwelling bacteria that won’t grow in the lab and discovered these organisms have genes that may produce novel precursors with the potential to create new ways to fight bacterial and fungal infections.

Many commonly used antibiotics were isolated from soil-dwelling bacteria. These bacteria grow in the lab, letting researchers more easily analyze the antibiotics and other products they produce. However, many other soil bacteria don’t grow in the lab, making it difficult to determine what, if anything, they produce and if the products might be useful. Now, that may be changing. By directly sequencing DNA from microbial communities in soil, researchers reconstructed the genetic details of hundreds of individual bacterial organisms in the community. And they found a surprise. They found novel lineages of bacteria. These bacteria encode genes to produce potentially unique compounds. From these compounds, it may be possible to derive new antibiotics drugs.

Previously, most naturally derived antibiotics were isolated from families of soil bacteria that grow easily in the lab. This work opens up a new frontier of antibiotic discovery. How? It allows researchers to analyze the genetic data of microbes that don’t grow in the lab. Also, the team identified specific species in highly understudied groups of soil bacteria that are likely productive sources for antibiotic discovery.

As part of a study on carbon cycling in soils, researchers deeply sequenced 60 soil metagenomes across a single grassland meadow at the Angelo Coast Range Reserve in northern California. A metagenome is all the genetic material present in an environmental sample, which includes many different individual organisms. By assembling these metagenomes and extracting the genomes of individual organisms at an unprecedented scale, they gained a picture of the genomic potential of hundreds of the most common bacteria in this complex soil ecosystem. The team then computationally searched the genomes for homologs (similar DNA sequences that share a common ancestry) of the genes required for the biosynthesis of antibiotics, siderophores, and other bioactive molecules. Unexpectedly, the team found that the bacteria commonly known and studied for the production of these complex compounds possess a minority of genes in the community for biosynthesis. Instead, researcher identified novel members of bacterial groups that scientists rarely study due to their slow growth and poor ability to grow in the laboratory. These novel groups possessed a majority of the biosynthetic genes in this soil environment. By characterizing these organisms and their biosynthetic genes, researchers plan to enable targeted study of these organisms and specific interrogation for their biosynthetic capabilities.

Sequencing was carried out under a Community Sequencing Project at the Joint Genome Institute. The Department of Energy, Office of Science, Office of Biological and Environmental Research; the Paul G. Allen Family Foundation; and the Innovative Genomics Institute of the University of California, Berkeley provided funding.