The device could reduce the carbon footprint of ethylene production

Researchers from the NUS Department of Chemistry have developed an artificial photosynthesis system that can produce ethylene gas using only sunlight, carbon dioxide and water. 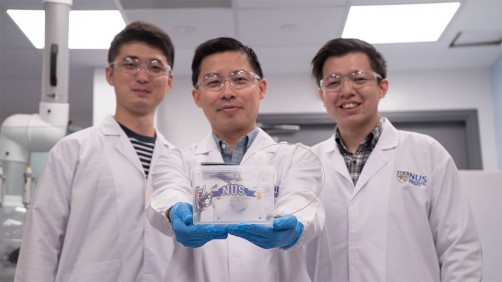 Newswise — A team of scientists from the National University of Singapore (NUS) has developed a prototype device that mimics natural photosynthesis to produce ethylene gas using only sunlight, water and carbon dioxide. The novel method, which produces ethylene at room temperature and pressure using benign chemicals, could be scaled up to provide a more eco-friendly and sustainable alternative to the current method of ethylene production.

This development led by Assistant Professor Jason Yeo Boon Siang from the Department of Chemistry at NUS Faculty of Science and the Solar Energy Research Institute of Singapore (SERIS) was first published in the prestigious scientific journal ACS Sustainable Chemistry & Engineering.

Challenges of the current production of ethylene

Ethylene, which is the building block of polyethylene, is an important chemical feedstock produced in large quantities for manufacturing plastics, rubber and fibres. More than 170 million tonnes of ethylene was produced worldwide in 2015 alone, and the global demand is expected to exceed 220 million tonnes by 2020.

Current industrial production of ethylene employs steam cracking of fossil fuels at between 750°C to 950°C, which consumes a large amount of energy and poses a strain on natural fuel resources. The current method also leaves a significant carbon footprint, emitting about two tonnes of carbon dioxide for every tonne of ethylene produced. As such, there is a growing demand for a cleaner and more sustainable way of producing ethylene.

Recognising the need for a more eco-friendly method, Asst Prof Yeo and his team tapped into renewable energy to produce ethylene. The team first designed a copper catalyst in 2015 that could generate ethylene from readily available water and carbon dioxide when powered by electricity. This copper catalyst was subsequently introduced into an artificial photosynthesis system to convert carbon dioxide and water into ethylene using only solar energy. The prototype device designed to carry out the reaction achieved a 30 per cent faradaic efficiency of ethylene based on the amount of electrons generated from solar energy. The overall energy efficiency of solar-to-ethylene is also comparable to the level of energy efficiency of natural photosynthesis by plants.

“Carbon capture is a key step in fighting human-driven climate change. There has been a steady increase in the atmospheric concentration of carbon dioxide, because the rate of carbon dioxide emissions exceeds that of carbon capture. This has been attributed as a major cause of global warming which leads to undesirable environmental changes. Our device not only employs a completely renewable energy source, but also converts carbon dioxide, a greenhouse gas into something useful. This could potentially close the carbon cycle,” said Prof Yeo.

The team also incorporated a battery in the prototype device to attain stable and continuous production of ethylene, a key challenge in artificial photosynthesis systems. The battery stores excess solar energy collected in the day to power the device at night or under low light, ensuring that operations are not interrupted by varying amount of sunlight throughout the day.

The invention marks a significant milestone in the realisation of a scalable artificial photosynthesis system for clean and sustainable production of important organic molecules like ethylene.

Moving forward, the team will continue to work on their device to scale up the production of ethylene as well as employ similar systems to produce liquid fuels such as ethanol and propanol.