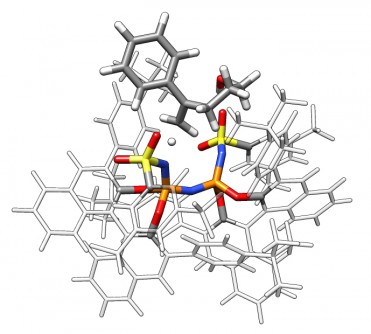 Newswise — In October, a scientist whose research was supported by modeling and simulation efforts on supercomputers at the US Department of Energy’s (DOE’s) Oak Ridge National Laboratory (ORNL) shared the Nobel Prize in Chemistry 2021.

The pair who won the prize, Benjamin List of the Max-Planck-Institut für Kohlenforschung and David MacMillan of Princeton University, developed a new and highly selective way of constructing chiral molecules, molecules which are mirror reflections of each other. This was achieved through asymmetric organocatalysis, a process in which an organic molecule serves as a catalyst that drives a chemical transformation to one desired product.

The team led by List at the Max-Planck-Institut required computer modeling of the phenomenon to augment their physical experiments running at the lab. That’s where the Oak Ridge Leadership Computing Facility (OLCF) and Dmytro Bykov, a computational scientist at ORNL, came in. Bykov used the 200-petaflop Summit, the OCLF’s flagship supercomputer, to simulate the team’s new catalysts turning molecules into specific end products. The modeling helped the team determine whether the new catalysts would be effective.

“With Summit, I could build a molecule, optimize it, and converge to a stable conformation,” Bykov said. “Then, I could take a molecule the team had in their reaction, place it in that catalyst, and see how it went over that barrier in my simulation.”

The team specifically studied the role of catalysts in the conversion of inert molecules called olefins. Olefins are among nature’s most abundant chemical compounds and commonly obtained from crude oil. They are of interest in biochemistry because they are ideal for use as precursors to drug compounds and other chemicals.

Catalysts work by lowering the energetic barriers of a chemical transformation and thus directing a molecule toward particular products. However, the products can be chiral, meaning they share the same composition and a similar structure but are flipped left or right from each other. Catalysts can force molecules into a left or right conformation, and these different positionings can have completely different effects—for example, in a human body.

“In a pairing, the left molecule might be a drug, and the right molecule might even be poison in some extreme examples,” Bykov said. “For this reason, it’s important to synthesize these into a specific direction.”

Without good catalysts, scientists might end up with a mixture of left and right molecules that could have deleterious effects. Organocatalysis offers a way around this problem.

“The team had theorized the most promising catalysis candidates, but they needed details on the reaction mechanisms that are difficult to determine in a lab setting,” Bykov said. “For instance, computer modeling can find structures of transition states, reaction barriers, and alternative pathways and ultimately shed light on the nature of substrate activation.”

Bykov’s simulations gave the team a way of determining how to stress a molecule in a specific way to move it closer to the desired product.

“In an experiment, the initial hypothesis may not work, and you may get something that you think should have reactivity, but it doesn’t,” Bykov said. “Computational modeling may help direct experimental efforts so that we can synthesize these new and important organic catalysts in more predictive and rational way.”

The OLCF is a DOE Office of Science user facility located at ORNL.