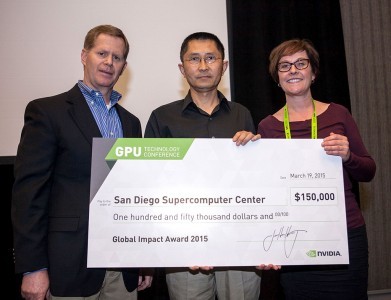 A team of researchers from the San Diego Supercomputer Center were recipients of NVIDIA’s 2015 Global Impact Award at the GPU Technology Conference March 17–20 in San Jose, Calif. Pictured from left to right: Ty McKercher, NVIDIA Principal Solution Architect; Yifeng Cui, a computational scientist at the San Diego Supercomputer Center; and Tonie Hansen, NVIDIA Director of Corporate Responsibility and chairwoman of the NVIDIA Foundation.

The simulations, which were conducted in part on the Titan supercomputer at the Oak Ridge Leadership Computing Facility (OLCF), help inform the design of safer buildings in earthquake zones and give scientists a better understanding of the surface-level effects of seismic waves. The OLCF is a US Department of Energy (DOE) Office of Science User Facility.

NVIDIA’s Global Impact Award is an annual award of $150,000 to researchers who use NVIDIA technology, such as Titan’s GPUs, for groundbreaking work that addresses social, humanitarian, and environmental problems. NVIDIA presented Cui with the award at the GPU Technology Conference March 17–20 in San Jose, Calif.

“We are very pleased to receive this award and NVIDIA’s recognition of how supercomputing advances can benefit science and society,” said Cui, who directs SDSC’s High-Performance Geocomputing Laboratory and is an adjunct professor at San Diego State University (SDSU).

“I share this honor with my colleagues at the Southern California Earthquake Center (SCEC) since our research, perhaps more than ever before, is done in the best spirit of collaboration,” Cui added. “We enabled some groundbreaking work on the Oak Ridge Leadership Computing Facility’s Titan and the National Center for Supercomputing Applications’ Blue Waters supercomputers. Together we made these simulations using GPU technology possible, which can advance society’s understanding of earthquakes hazards and how we can better prepare for them.”

Using Titan, a 27-petflop Cray XK7 located at DOE’s Oak Ridge National Laboratory, Cui and his colleagues simulated a 7.2-magnitude quake using a complex geometry representative of the San Andreas Fault. Their code broke scientific and technical barriers, providing scientists for the first time with the ability to simulate ground motions from large fault ruptures with frequencies as high as 10 Hz in a physically realistic way.

The GPU-accelerated code Cui and his team developed, known as AWP-ODC, ran an estimated five times faster on Titan’s GPUs than it would have on traditional architecture. The code was originally developed by Kim Olsen and Steven Day at SDSU and is used by SCEC to improve its CyberShake platform, an ongoing sweep of millions of earthquake simulations that model many rupture sites across California.

“The full three-dimensional treatment of seismic-wave propagation has the potential to improve seismic hazard analysis models considerably, and that is where the accelerating technology is particularly helpful at this moment,” said Thomas Jordan, director of SCEC. —Jonathan Hines