One Photon or Two? 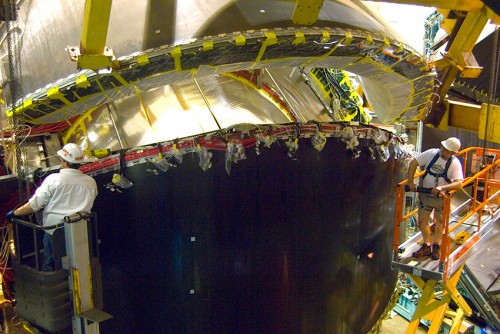 Two workers inspect components of the CEBAF Large Acceptance Spectrometer. The CLAS detector can measure the momentum and angles of almost all of the particles produced in electron-proton collisions. Roughly spherical, the detector spans 30 feet across.

Nuclear physicists have long used two different experimental methods to determine how quarks – the building blocks of the proton – are arranged inside the particle and how they move. But, results from these methods disagree by nearly a factor of five in deep probes of the proton. Physicists have now found that the two-photon exchange effect greatly augments the results of one of the methods, and including this augmentation resolves the difference in the results, which confirms that both experimental methods are valid.

Nuclear physicists have used two different methods to determine the ratio of the proton's electric-to-magnetic form factors, quantities that describe how quarks, the building blocks of the proton, are arranged and how they move inside the particle. But, the two experimental methods that have been used to independently determine this ratio have delivered dramatically different results. It was thought that the two-photon exchange effect may be contributing more to one measurement (Rosenbluth separation) than the other (polarization transfer). This effect has so far proven too difficult to precisely calculate and cannot yet be measured directly. However, the two-photon exchange effect can be measured indirectly by noting how often the electron interacts with the proton and comparing that to how often the electron’s anti-matter twin, the positron, interacts with the proton. A team of more than 100 nuclear physicists conducted experiment E04-116: Beyond the Born Approximation: A Precise Comparison of Positron-Proton and Electron-Proton Elastic Scattering in CLAS. The experiment yielded the first-ever mixed matter/anti-matter (electrons/positrons) beam measurement of the proton. The positron-to-electron (e+p/e−p) ratios agree with hadronic two-photon exchange calculations, which would resolve the proton form factor discrepancy up to Q2 ~2.5 GeV2. Two other research groups, the VEPP-3 collaboration at Novosibirsk and the OLYMPUS collaboration at DESY, have also been measuring this effect, although with single beams of electrons that they compare to single beams of positrons. VEPP-3 measured similar results, and OLYMPUS collaborators are still analyzing their data. This result has relevance for the proton radius extraction, and it also suggests that the proton structure comes from more than just the internal properties of the constituent quarks; for example, the proton’s intrinsic spin doesn’t arise strictly from the spin of the quarks but must come from the quarks’ orbital motion or the gluons.