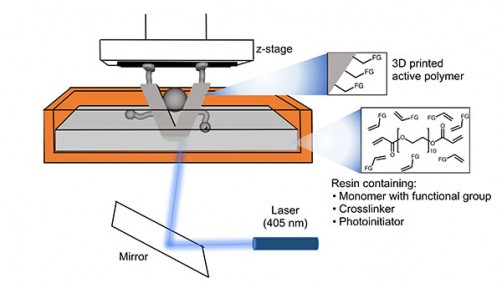 Catalysts can be built in one step by directly shining a laser through a bath of customized resins that polymerize and harden layer-by- layer.

Ames Laboratory has developed a one-step 3D-printing process for catalysts that can be customized to any shape-- in this demonstration the Ames Laboratory logo design.

Newswise — The U.S. Department of Energy’s Ames Laboratory has developed a 3D printing process that creates a chemically active catalytic object in a single step, opening the door to more efficient ways to produce catalysts for complex chemical reactions in a wide scope of industries.

While 3D printing has found applications in many areas, its use as a way to control chemical reactions, or catalysis, is relatively new. Current production of 3D catalysts typically involves various methods of depositing the chemically active agents onto pre-printed structures.

The Ames Laboratory method combines the structure with the chemistry in only one step using inexpensive commercial 3D printers. The structures are designed in a computer and built directly by shining a laser through a bath of customized resins that polymerize and harden layer-by-layer. The final product that emerges has catalytic properties already intrinsic to the object.

“The monomers, or building blocks that we start with, are designed to be bifunctional. They react with light to harden into the three-dimensional structure, and still retain active sites for chemical reactions to occur,” said Sebastián Manzano, a graduate student in the Department of Chemistry at Iowa State and who conducted most of the experiments.

The catalysts built with this method demonstrated success in several reactions common to organic chemistry. They are also adaptable with further post-processing, making possible multi-step reactions.

“We can control the shape of the structure itself, what we call the macroscale features; and the design of the catalyst, the nanoscale features, at the same time”, said Igor Slowing, a scientist in heterogeneous catalysis at the U.S. Department of Energy’s Ames Laboratory. “This opens up many possibilities to rapidly produce structures custom designed to perform a variety of chemical conversions.”

This research is further discussed in the paper “Direct 3D Printing of Catalytically Active Structures,” authored by J. Sebastián Manzano, Zachary B. Weinstein, Aaron D. Sadow, and Igor I. Slowing; and published in ACS Catalysis. 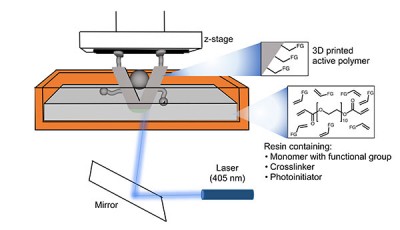 Caption: Catalysts can be built in one step by directly shining a laser through a bath of customized resins that polymerize and harden layer-by- layer.

Caption: Ames Laboratory has developed a one-step 3D-printing process for catalysts that can be customized to any shape-- in this demonstration the Ames Laboratory logo design.