Only the Good Shall Pass: Battery with a Built-in Bouncer 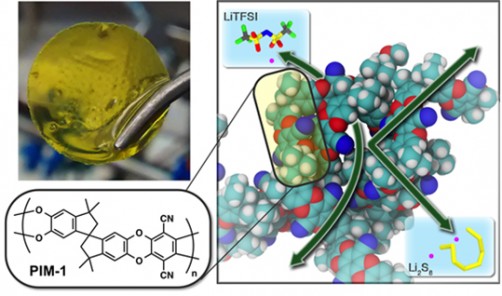 Flow batteries use two charged liquids separated by a membrane. The battery’s working ion must pass through the membrane while the active materials storing and releasing charge must stay sequestered in their respective electrode compartments. Now scientists, guided by simulations, have made a much more selective membrane (top left) from a polymer with tailored microporosity (right). The chemical structure of the polymer is shown on the bottom left. This specialized membrane greatly reduced active-material crossover, resulting in improved battery lifetime and efficiency.

Flow batteries offer low-cost energy storage, but the battery’s membrane reduces its operating life and efficiency. The battery’s working ion must pass through the membrane while the materials storing and releasing charge must stay put. Guided by simulations, scientists made a more selective membrane with controlled porosity. The design improves the transport selectivity of the membrane for different species based on their size and charge. The team used the tailored separator in a special type of flow battery, called a redox-flow battery; the membrane minimized the detrimental crossover of battery’s active materials thereby improving battery performance.

Scientists can tune these easy-to-make membranes to control transport properties in electrochemical devices ranging from batteries to fuel cells and significantly improve the performance of batteries.

The membrane separators in-between the electrodes of a redox-flow battery must allow the working ion to shuttle between the electrodes while preventing the crossover of the active species that leads to low efficiency and even device failure (shorting). Battery designs using commercially available membranes often fail because the active species move from one side of the battery to the other. Now, researchers from the Joint Center for Energy Storage Research have used molecular dynamics simulations to inform the design of membranes with controlled porosity to make them more selective in what will pass through the pores. These plastic separators are easily made and can selectively transport species based on their size and charge because of their well-controlled pore size, structure, and chemistry. Unlike typical commercially available membranes, these enhanced membranes blocked the detrimental crossover of active species with minimal effect on the transport of the working ion that is needed for the battery to operate. Batteries with these designed separators had dramatically improved performance compared to those with commercial separators. When these new separators were infiltrated by the conductive solvent (electrolyte), they swelled, advantageously creating an interconnected electrolyte network that conducted just the ions needed for battery operation. The network in the new separator simultaneously blocked the detrimental crossover of the larger active species based on their size. More specifically, these separators with sub-nanometer pores exhibited unprecedented blocking capability for polysulfide active species in hybrid lithium-sulfur redox-flow batteries. Designing separators based on simulations that take into account solvated structures of ions and active species can improve performance of a range of electrochemical devices.