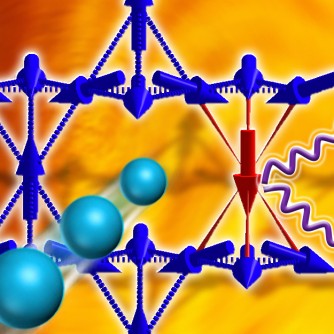 An ORNL-led research team used neutrons (depicted as spheres) to determine the magnetic structure (seen as blue arrows) of an osmium-based material. X-rays (seen as purple waves) revealed the presence of a strong spin orbit effect (illustrated in red).

Newswise — OAK RIDGE, Tenn., June 7, 2016—An elusive massless particle could exist in a magnetic crystal structure, revealed by neutron and X-ray research from a team of scientists led by the Department of Energy’s Oak Ridge National Laboratory and the University of Tennessee.

In a paper published in Nature Communications, the research team studied a material containing the dense element osmium and documented two conditions required for the presence of Weyl fermions -- massless particles predicted in 1929 and observed experimentally for the first time in 2015. Researchers are looking for other materials that could host the particles, with the goal of harnessing their unique properties in spintronics and advanced computing applications such as quantum computers.

“Once you have a material that hosts these particles, they can behave like electrons but travel much faster since they’re massless,” said ORNL’s Stuart Calder, first author on the team’s study. “Since all of electronics is based on the electron, if you replace electrons with these Weyl fermions, in principle you could have much faster devices.”

The scientists conducted neutron diffraction studies at the High Flux Isotope Reactor, a DOE Office of Science User Facility at ORNL, to clearly define the magnetic order of an osmium-based material with a pyrochlore crystalline structure. They discovered it has an “all-in, all-out” magnetic order—one of two requirements for this type of material to contain Weyl fermions.

“It describes the spins of electrons and how they arrange; they all either point to the center or they all point out,” Calder said. “Neutrons are the standard and the best way to determine magnetic structure. The magnetic peaks in these materials are weak because they have smaller sized spins, so you have to use an instrument like we have here to see them.”

The second criterion is strong spin-orbit coupling, a property of all atoms that describes how an electron’s spin and its motion around an atom are linked. Generally, larger atoms with more electrons exhibit a stronger spin-orbit effect. But the osmium in this material, even though it is a heavy and dense element, has an electron configuration thought to remove spin-orbit effects.

“It’s expected that the spin-orbit coupling effect in osmium should be suppressed or ignored in this pyrochlore material,” Calder said. “But this was the first time anyone measured an osmium-based material with this X-ray technique. The point of the X-rays was to look for signatures of strong spin-orbit coupling and that’s what we saw.”

Calder cautions that the team’s research is not direct evidence of Weyl fermions in an osmate material, but it does suggest the material is a potential host.

The research was supported by DOE’s Office of Science.