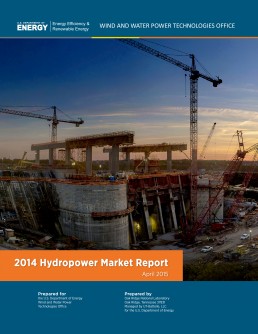 Newswise — OAK RIDGE, Tenn., April 27, 2015 – For the first time, industry and policymakers have a comprehensive report detailing the U.S. hydropower fleet’s 2,198 plants that provide about 7 percent of the nation’s electricity.

The 98-page report by the Department of Energy’s Oak Ridge National Laboratory researchers Rocio Uria-Martinez, Patrick O’Connor and Megan Johnson is a resource that describes key features of the nation’s hydro resources and systematically tracks trends that have influenced the industry in recent years.

“The people who make critical decisions about U.S. hydropower can now turn to one place to find information that has broad implications,” said Uria-Martinez, who noted that the existing fleet has been constructed over the course of an entire century. “Hydropower has a long history but also a promising future as it continues to grow and play a key role in the nation’s power system.”

People who access the report can easily search the database to make highly informed decisions that have a direct impact on the lives of potentially millions of people, Uria-Martinez said.

• with a total capacity of nearly 80 gigawatts, hydropower remains a major contributor to the power system;• 42 pumped storage hydropower plants with a total rated capacity of 21.6 gigawatts account for 97 percent of utility-scale electrical energy storage;• hydropower projects support more than just the power system as most, particularly the large dams, provide recreation, flood control, irrigation, navigation and/or water supply;• with 176 plants, federal agencies, including Tennessee Valley Authority, own nearly half of the hydropower capacity. These facilities account for 49 percent of the capacity but only 8 percent of the plants;• despite the retirement of some plants, hydropower capacity increased by almost 1.5 gigawatts from 2005 to 2013. Capacity additions to existing projects accounted for 86 percent of the increases;• at the end of 2014 there were 16 new hydropower projects under construction. Those projects totaled 407 megawatts and their estimated construction cost is close to $2 billion; and,• the permitting and licensing process for many smaller hydropower projects has changed in recent years, which could result in less cost and less time spent in federal permitting.

The report highlights the diversity of the hydropower fleet in terms of location, size, ownership and operational modes. The fleet includes high-flexibility pumped storage hydropower and peaking hydropower plants as well as run-of-river facilities with capacity factors as high as 80 percent. Additionally, there are many federal owned hydropower plants associated with large reservoirs where electricity generation is seen as a byproduct of other authorized purposes.

This 2014 Hydropower Market Report complements existing annual reports such as the DOE Wind Technologies Market and Distributed Wind Market reports, which collectively provide a wealth of information about the nation’s renewable power resources, Uria-Martinez said. The hydropower report is available at http://nhaap.ornl.gov/HMR/2014.