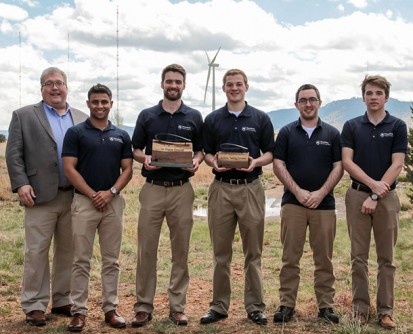 The Penn State team, comprised of 11 students from various engineering majors, beat out nine other teams from across the nation, earning a total of 762 points out of a possible 1,000, which was 161 points ahead of the second-place finisher. The team also took first place in the Tunnel Testing contest with a score of 365 points out of a possible 450.

“The advisers of the team are extremely proud of the Wind Energy Club students for their hard work on this wind competition activity,” said Susan Stewart, lead strategic adviser of the team and senior research associate and assistant professor of aerospace engineering. “They are getting really great experience in systems thinking and putting their overall engineering education to work as they tackle the challenges of this project.”

The Collegiate Wind Competition 2017 Technical Challenge is an opportunity for institutions that participated in the U.S. Department of Energy Collegiate Wind Competition 2016, which Penn State won, to capture the spirit of team collaboration and apply the acquired skills and knowledge to the technical challenge event. The competition focused on testing a small-scale wind turbine in a portable wind tunnel designed and built by the National Renewal Energy Laboratory. This year’s event also added the challenge of testing in yawed inflow to address changing wind directions.

“Even though we won the main event last year, we came in third place in 2015 at the exact same technical competition in the exact same location, so we had some extra motivation this year,” said Jason Cornelius, aerodynamics team lead, vice president of the Wind Energy Club and a senior in aerospace engineering. “It was all new to us in 2015, and since all of the 2014 team members had graduated, there wasn’t any significant knowledge transfer to our team. However, we spent the last two years trying to build a turbine based on what we learned that would allow us to come back and pull out a victory. It was pretty exciting to redeem ourselves.”

Each team was required to design, build and present a unique, wind-driven power system; document the design of the turbine and load in a technical report; and present on the design and report to a panel of judges.

Building on its innovative, winning turbine design for the 2016 competition, the team was able to improve the design and efficiency of this year’s turbine by focusing on several key generator components according to Mitch Proulx, generator team lead, president of the Wind Energy Club and a senior in mechanical engineering.

“We used a one-stage generator last year, which performed extremely well, but we wanted to add more stages this time to generate even more power,” said Proulx. “By using three stages, along with replacing some of the iron parts with 3D-printed parts, we were able to significantly increase our power because the generator was not only more efficient, but it weighed 22 percent less than it used to weigh.”

The team also realized gains through improvements to its electrical components which were designed by Patrick Nicodemus, electrical design team lead and a senior in electrical engineering and mathematics.

“Patrick was able to design a circuit that would regulate the voltage so as to not exceed the maximum limit for the competition, morphing itself as it drew power from the turbine,” said Cornelius. “It was crazy.”

Senior members of the team will be passing along their knowledge to their teammates to help them and future members continue their success.

The team will now focus its efforts on defending its title at the Collegiate Wind Competition 2018, which will take place during the annual American Wind Energy Association WINDPOWER Conference and Exhibition in Chicago, Illinois, May 7–10, 2018. Penn State will compete against 11 other universities.