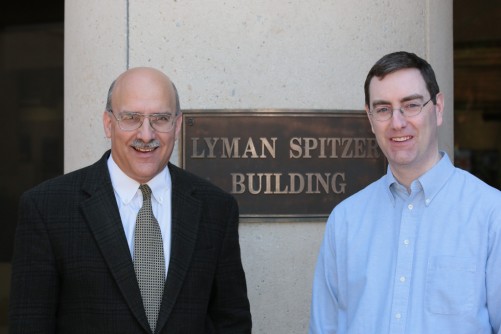 Newswise — Steven Sabbagh and Jack Berkery, Columbia University physicists on assignment to the U.S. Department of Energy’s (DOE) Princeton Plasma Physics Laboratory (PPPL), have received the 2016 Landau-Spitzer Award for outstanding contributions to plasma physics. Also sharing in the award are Holger Reimerdes of the École Polytechnique Fédérale de Lausanne in Switzerland and Yueqiang Liu of the Culham Centre for Fusion Energy in the United Kingdom. The award is named for Russian physicist Lev Landau, a 1962 Nobel laureate, and Princeton astrophysicist Lyman Spitzer, founder of PPPL.

The biennial honor, which is presented by the American Physical Society (APS) and the European Physical Society (EPS) and includes a $4,000 total honorarium, recognizes outstanding research that also advances collaboration and unity between U.S. and European scientists. This year’s award, to be given in July at the EPS 43rd Conference on Plasma Physics in Leuven, Belgium, honors advances in experimentally validated understanding of the stability of resistive wall modes (RWMs) — a type of instability that can limit high plasma pressure, an essential ingredient for fusion reactions in tokamaks.

"Nearly a decade of publications"

The award recognizes “nearly a decade of publications on research investigating and validating kinetic resistive wall mode stability theory,” said Sabbagh, principal investigator for research on magnetohydrodynamic (MHD) stability on the National Spherical Torus Experiment-Upgrade (NSTX-U); the field treats plasma as an electrically charged fluid. Adds Berkery, who leads the macroscopic stability topical science group on the NSTX-U: “We want to operate tokamaks with greater stability. Understanding how to do that is very important.”

The award winners’ research has transformed the understanding of ways to stabilize RWMs. For example, scientists had thought that rapid plasma rotation was sufficient for stabilization, but Sabbagh and Berkery showed that the situation was more complex. While high rotation can enhance stability, they found that RWMs can be unstable at significant plasma rotation, and that some plasmas can be stable at lower rotation rates. Their experiments and associated theory demonstrate and explain how this can happen.

Such findings are relevant to high-pressure fusion facilities like ITER, the international tokamak under construction in France to demonstrate the feasibility of fusion power, which will operate with reduced plasma rotation and collisionality.

The research of Reimerdes and Liu has corroborated this work and provided essential theory. Reimerdes developed a technique called MHD spectroscopy to probe the stability of plasmas in the DIII-D National Tokamak Facility that General Atomics operates for the DOE in San Diego. This technique was used in both DIII-D and the National Spherical Torus Experiment — the predecessor to the NSTX-U — to confirm the initial Sabbagh and Berkery results.

Liu also developed and evolved a kinetic RWM theory, and the four physicists worked together to solve outstanding issues during this research. Liu created a computer program called MARS-K, which calculates RWM stability in a manner similar to Berkery’s MISK code. Berkery developed MISK from an original University of Rochester effort by physicists Bo Hu and Riccardo Betti.

Liu and Berkery led a multi-year effort, with other physicists, to benchmark calculations of the MARS-K and MISK codes against each other. Both codes produced similar findings, giving confidence in the results.

Sabbagh and Berkery are now using this knowledge to find ways to avoid disruptions, a task presently thought of as the next “grand challenge” for fusion research in the leading confinement device – the tokamak. The physicists plan experiments on NSTX-U and on the Korea Superconducting Advance Research (KSTAR) facility, where Sabbagh is a principal investigator for MHD stability research.