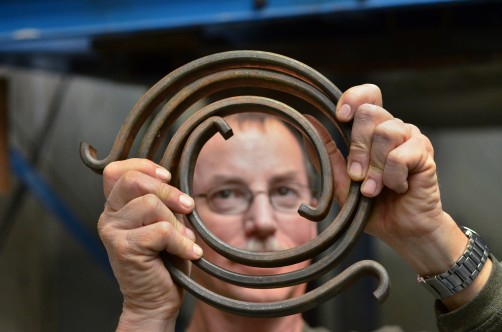 Elton Wright shows a torsional spring that’s used to simulate the rotational vibration of the drill string in a Sandia experiment. 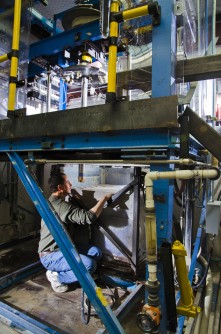 Newswise — Nearly two-thirds of the oil we use comes from wells drilled using polycrystalline diamond compact (PDC) bits, originally developed nearly 30 years ago to lower the cost of geothermal drilling. Sandia and the U.S. Navy recently brought the technology fullcircle, showing how geothermal drillers might use the original PDC technology, incorporating decades of subsequent improvements by the oil and gas industry.

Sandia and the Navy’s Geothermal Program Office (USN GPO) conducted the Phase One demonstration tests as part of a geothermal resources evaluation at the Chocolate Mountains Aerial Gunnery Range in Imperial Valley, Calif.

“Oil and gas drilling is normally done in softer and less-fractured rock, resulting in fewer problems with fluid circulation to remove debris and cool the bit,” he said. “Oil and gas drilling also doesn’t usually involve the higher temperatures that geothermal wells exhibit.”

But as the oil and gas industry looks for new sustained resources in deeper reservoirs, it encounters more difficult drilling conditions similar to those found in geothermal drilling.

“Oil and gas drilling must now go deeper into the ground, into harder and sometimes fractured rocks, and in hotter environments,” said Raymond.

Raymond said geothermal resources are typically associated with igneous and metamorphic rocks, which are harder than the sedimentary rocks through which most oil and gas wells are drilled. Igneous and metamorphic rocks also can contain large amounts of abrasives such as quartz, which can cause vibration and accelerated wear that damages drill bits. These types of rocks are often fractured, which can change the impact loading on drills and cause more damage.

“Drilling for geothermal energy is still the most difficult drilling on a cost-per-foot basis,” said Raymond. “You have to go through the hardest rock, sometimes at high temperatures and pressures. The DOE (Department of Energy) vision for advanced geothermal development is to drill to great depths, up to 30,000 feet, to access heat for geothermal.”

The economic risk for oil and gas wells also is different. Because many more oil and gas wells are drilled per year, that industry has the resources and can invest significantly in research and testing to improve the ability to drill under increasingly difficult conditions.

The geothermal industry has advanced far more slowly. Because geothermal drillers create only a small number of new wells each year, the drilling service industry finds it difficult and expensive to support innovation, since each well represents a substantial risk.

The Sandia/Navy demonstration project called for a test hole to evaluate geothermal resources in the Camp Billy Machen/Hot Mineral Spa region that would have been otherwise undetectable at the surface. The basement rock at the Chocolate Mountains includes granite and andesite, formations typically encountered during geothermal drilling.

A key part of the demonstration project was to test and evaluate PDC bits and related technologies in a real-world drilling environment. Sandia worked with PDC bit manufacturer National Oilwell Varco (NOV) of Houston to find specific solutions for the company’s ReedHycalog PDC bits. NOV provided commercially available drill bits and on-site experts to counsel the drilling contractor during the demonstration drill runs.

In the tests, two bits drilled 1,291 feet of the overall well depth of 3,000 feet. The two bits were in the well just over four days, penetrating approximately 30 feet per hour throughout their drilling interval, nearly three times better than standard roller bits used for comparison. The team retrieved and downloaded downhole data from both bits for analysis.

In a planned second phase of the project, Sandia will continue work with NOV to evaluate drill performance and improve the bit design and materials.

Cooperative work between the Navy and Sandia was covered by a memorandum of understanding between the Department of Defense and the DOE on collaborative development of renewable energy resources.

The demonstrations and planned phase two drilling are funded through an American Recovery and Reinvestment Act project, “Technology Development and Field Trials of EGS Drilling Systems,” under the supervision of DOE.

How PDC cutters are made

Polycrystalline diamond compact cutters on the cutting faces of bits allow more aggressive drilling than bits traditionally used for geothermal drilling. They are created by a sintering process. Graphite powder is applied to the leading face of a cutter made of tungsten carbide. The material assembly is compressed in three directions at pressures of 1 million pounds per square inch. When heated to a transition temperature, the graphite converts a to a 1-millimeter layer of synthetic diamond. 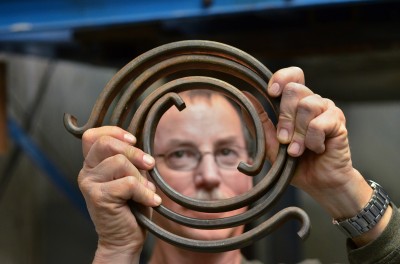 Caption: Elton Wright shows a torsional spring that’s used to simulate the rotational vibration of the drill string in a Sandia experiment. 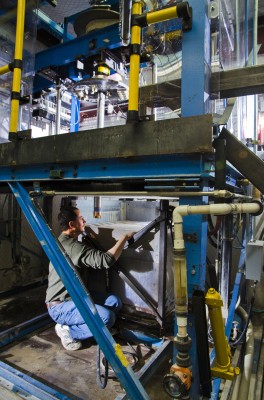