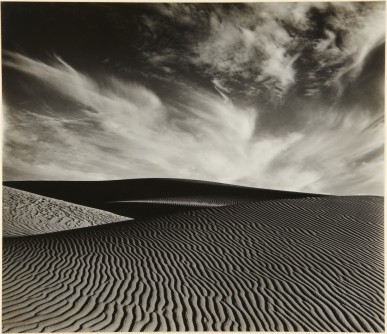 Newswise — When you think of a physicist, what comes to mind? Perhaps a figure in a white lab coat tinkering with complex machinery. Or maybe a wild-haired theoretician scribbling equations on a chalkboard. And you might believe that the world of physics is entirely consumed with numbers and devices, with no connection to the non-scientific world.

If so, you would be mistaken. In fact, physics has a deep relationship with art. Both artists and physicists are interested in symmetry and patterns, and both claim that beauty is an integral component of their work. Though they appear different at first glance, physics and art turn out to have many connections.

This winter, a group of past and present PPPL graduate students collaborated on a new exhibition at the Princeton University Art Museum that explores those connections. The exhibition, called Fluid Motions: A Conversation Between Art and Physics, features 27 images from the museum's collection, including photographs by Ansel Adams, Brett Weston, and Henry Troup. It is on view in the museum's Works on Paper Study Room on weekends through March 6.

Fluid Motions was organized by Veronica White, the Andrew W. Mellon Curatorial Assistant for Academic Programs. She also happens to be the daughter of Roscoe White, a long-time PPPL theoretical physicist. The exhibition began as a series of conversations in early 2015 between White and three PPPL graduate students: Vinicius Njaim Duarte, Joshua Burby, and Jonathan Squire. Burby and Squire are now postdocs at New York University and the California Institute of Technology, respectively. "We discussed a range of topics, including symmetry, balance, movement, and beauty," White said. "We then discussed pattern formation in both art and physics and out of that grew the idea to create this installation."

White chose photographs from the museum's collection and the graduate students helped write the descriptive text. "I wanted to recreate the experience of our conversations, which mixed perspectives from both the physics and art history worlds," she said.

The installation shows that physics and art share many of the same concerns. "There are a lot of elements in this exhibit related to daily life at PPPL, including symmetry, turbulence, chaos, pattern formation, and oscillatory behavior, among others," said Duarte, a fourth-year graduate student in plasma physics. "Physics is a kind of art," continued Duarte. "It involves a great deal of beauty and aesthetic satisfaction."

Duarte studies the interaction between energetic particles and plasma waves in research guided by Nikolai Gorelenkov, a theoretical physicist at PPPL. While helping create the installation, Duarte was struck by parallels between some of the photos and his own research. "Henry Troup's 1990 series Wind, Water and Sand particularly captures some phenomena of my research, such as shear flows, instabilities, self-organization and turbulence," he said.

Science and art have been intertwined for centuries, said White. "Think of Leonardo da Vinci, with his interests in anatomy and vortices," she said. "In a lot of ways, he was more skilled at drawing a complicated concept than at explaining the concept using words, so his sketches became a kind of scientific investigation."

White added that the close relationship between science and art can be widely seen. "For example, Monet's outdoor paintings reflected a keen sense of observation," she said. "In his writings you can sense his angst that he can't paint quickly enough to capture the fleeting light effects that he's noticing."

After the installation has closed, an electronic version will be available on the art museum's website at http://artmuseum.princeton.edu/object-package/fluid-motions-conversation-between-art-and-physics/64943. As for whether there might be more installations like this one, White simply noted that "there certainly could be opportunities to do something again in the future."