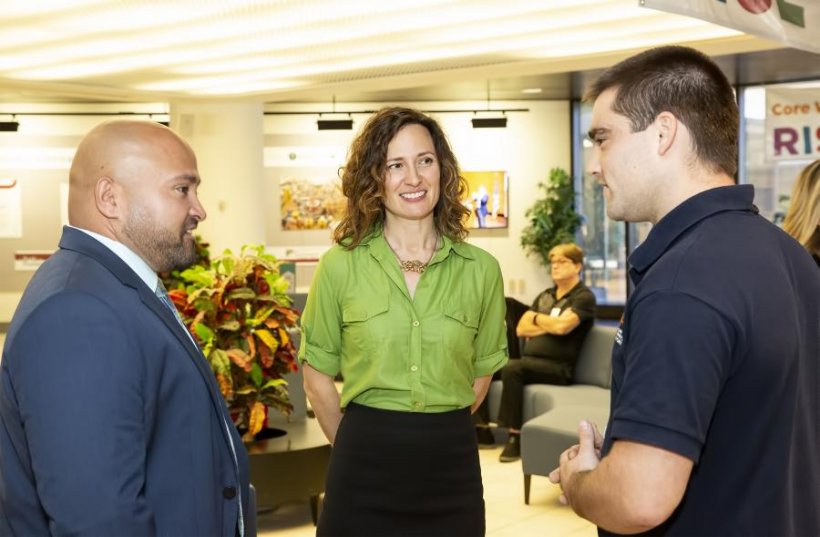 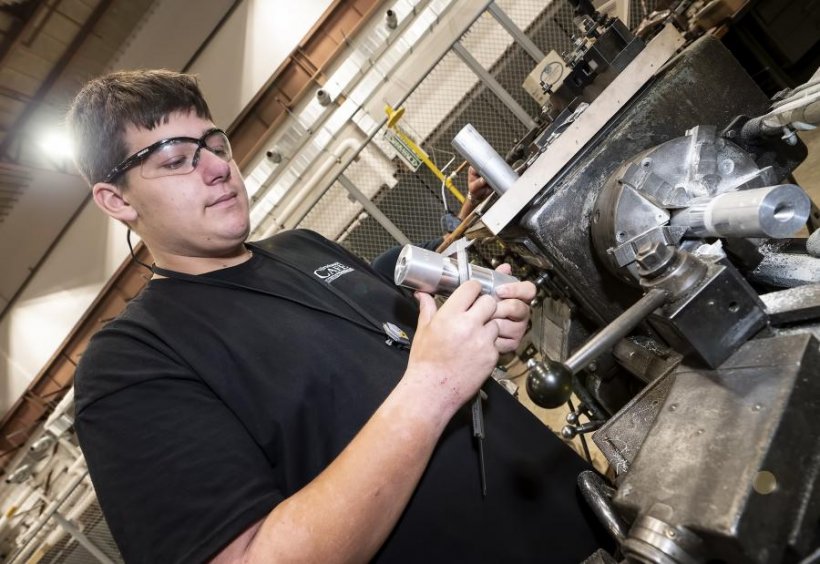 Bongiovanni at work in the machine shop.

Newswise — One day after Labor Day, four early-career technicians officially began four-year apprenticeships at the Princeton Plasma Physics Laboratory (PPPL) where they will learn cutting-edge skills both on the job at a national laboratory and in the classroom.

The apprentices signed on Sept. 3 to become mechanical and electrical technicians in a ceremony at PPPL with top officials from PPPL, Princeton University, the U.S. Department of Energy, and the state of New Jersey looking on. They will work on building components for PPPL’s fusion energy and plasma experiments, which include the National Spherical Torus Experiment-Upgrade,  a new Facility for Laboratory Reconnection Experiment (FLARE), which will study the astrophysical process of magnetic reconnection responsible for solar flares and the Northern Lights; PPPL’s Lithium Tokamak Experiment-ß, and components for ITER, the international fusion experiment now under construction in France.

The apprenticeship program was started by Steve Cowley, PPPL director, who saw similar programs work in England when he was head of the Culham Centre for Fusion Energy. “Technicians can fix anything, they can build anything, they play an incredible part in all aspects of our Laboratory,” Cowley said.  “We want to train technicians to bring them on to be part of the PPPL family.”

Paul Dabbar, the DOE Under Secretary for Science, said he supports the idea of partnering with other government agencies to train staff at research laboratories. Some 60,000 people are employed at the DOE and its 17 national laboratories, making it one of the largest research and development organizations in the world, Dabbar said during the ceremony. PPPL is doing important research aimed at developing fusion energy, which would be clean, plentiful, and affordable, Dabbar said. “We very much appreciate our partnership with PPPL and the team that has been working on this training program to take this from theory to application,” he said.

Robert Asaro-Angelo, the New Jersey Commissioner of Labor and Workforce Development, said the apprenticeship program is “a great example” of a partnership between government agencies and academic institutions. He noted that the New Jersey Apprenticeship Program has expanded dramatically to include 80,000 people under Gov. Phil Murphy. “This is a perfect time to be growing and expanding apprenticeships in New Jersey and to create pathways and have systems in place that will work even if the economy isn’t as strong as it is now,” Asaro-Angelo said. “This earn-while-you-learn model has implications for other sectors.”=

David McComas, Princeton University vice president for PPPL, said that technicians are “the unsung heroes” in every research program, whether it is a national laboratory like PPPL or the nation’s space program. “I’m so delighted that we have this technical apprenticeship program at PPPL,” he said. “We are very hopeful that this will be a large and growing program over time.”

Most of the apprentices have some vocational training already. They participated in a six-week pre-apprenticeship internship this summer before applying for the program. They will receive competitive pay and benefits and will complete 8,000 hours of on-the-job training and 576 hours of related technical coursework during the program, which are subsidized by the New Jersey Department of Labor.  When finished, they will be eligible to apply for a permanent position at PPPL. The pilot program will continue over the next several years with more apprentices added each year.

The program took more than a year to set up. “I’m very happy that it has actually launched,” said Valeria Riccardo, PPPL’s head of engineering, adding that the program will allow PPPL’s highly-skilled technicians to pass along their skills before they retire. “Our technicians have a skill set that is quite unusual and we need to capture their skills and continue to do what we are doing for as long as we can,” she said.

While other apprenticeships may offer technical skills, PPPL’s apprenticeship offers the opportunity to develop technical skills for a higher purpose – developing fusion energy, said Shannon Swilley Greco, a Science Education senior program leader and another program organizer. “They can devote their careers, as so many of our technicians have, to something that will continue to benefit society well beyond their own retirement,” she said.

“We’re excited to add these talented individuals to our technical staff,” said Andrea Moten, deputy director of Human Resources, who also helped organize the program. “They’re enthusiastic, bright and eager to learn and make a contribution to the Laboratory’s mission.”

“Their skills vary but they all have a very good aptitude and a very good attitude,” said Andrew Carpe, the administrator of the program.  “They’re eager to learn and get started.”

The apprentices and their parents, many of whom attended the ceremony, said they are grateful to be joining the program despite the hard work ahead. “I’m happy,” said Robert Bongiovanni, of Hamilton Township, New Jersey, one of the mechanical apprentices. “I wanted to work here. It’s great if you want to learn something. They really teach you everything.”

Kevin Purdy Sr., of Chesterfield, New Jersey, a Princeton University employee for 35 years and a former PPPL employee, came to the ceremony with his wife Kathy to cheer on their son Kevin Purdy Jr. He said he was happy to see his son, join the apprenticeship program. “He’s been working hard to get a permanent job,” he said. “He’s a really good kid. At one point, he was working three jobs and going to school full-time. He’s very mechanically handy. He likes to build cars and stuff like that.”

Learning a variety of skills

Donald Twomey, of Princeton, said he was delighted that his son Sheehan is joining the apprenticeship program. “He’s thrilled and we’re just ecstatic,” he said. “This could be a whole lifetime direction for him.”

PPPL, on Princeton University's Forrestal Campus in Plainsboro, New Jersey, is devoted to creating new knowledge about the physics of plasmas — ultra-hot, charged gases — and to developing practical solutions for the creation of fusion energy. PPPL is managed by the University for the U.S. Department of Energy’s Office of Science, which is the single largest supporter of basic research in the physical sciences in the United States and is working to address some of the most pressing challenges of our time.  For more information, visit https://energy.gov/science.

Caption: Bongiovanni at work in the machine shop.