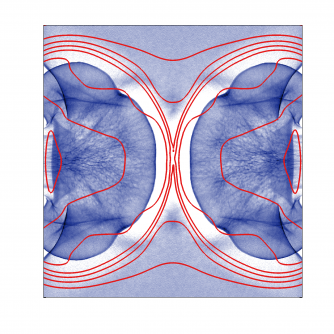 Newswise — The U.S Department of Energy (DOE) has awarded a total of 80 million processor hours on the fastest supercomputer in the nation to an astrophysical project based at the DOE’s Princeton Plasma Physics Laboratory (PPPL. The grants will enable researchers led by Amitava Bhattacharjee, head of the Theory Department at PPPL, and physicist Will Fox to study the dynamics of magnetic fields in the high-energy density plasmas that lasers create. Such plasmas can closely approximate those that occur in some astrophysical objects.

The awards consist of 35 million hours from the INCITE (Innovative and Novel Impact on Computational Theory and Experiment) program, and 45 million hours from the ALCC, (ASCR — Advanced Scientific Computing Research — Leadership Computing Challenge.) Both will be carried out on the Titan Cray XK7 supercomputer at Oak Ridge National Laboratory. This work is supported by the DOE Office of Science (ASCR).

The combined research will shed light on large-scale magnetic behavior in space and will help design three days of experiments in 2016 and 2017 on the world’s most powerful high-intensity lasers at the National Ignition Facility (NIF) at the DOE’s Lawrence Livermore National Laboratory. “This will enable us to do experiments in a regime not yet accessible with any other laboratory plasma device,” Bhattacharjee said.

The supercomputer modeling, which is already under way, will investigate puzzles including:

Magnetic field formation. The research will study “Weibel instabilities,” the process by which non-magnetic plasmas merge in space to produce magnetic fields. Understanding this phenomena, which takes place throughout the universe but has proven difficult to observe, can provide insight into the creation of magnetic fields in stars and galaxies.

Magnetic field growth. Another mystery is how small-scale fields can evolve into large ones. The team will model a process called the “Biermann battery,” which amplifies the small fields through an unknown mechanism, and will attempt to decipher it. Explosive magnetic reconnection. The simulations will study still another process called “plasmoid instabilities” that have been widely theorized. These instabilities are believed to play an important role in producing super high-energy plasma particles when magnetic field lines that have separated violently reconnect.

The NIF experiments will test these models and build upon the team’s work at the Laboratory for Laser Energetics at the University of Rochester. Researchers there have used high-intensity lasers at the university’s OMEGA EP facility to produce high-energy density plasmas and their magnetic fields.

At NIF, the lasers will have 100 times the power of the Rochester facility and will produce plasmas that more closely match those that occur in space. The PPPL experiments will therefore focus on how reconnection proceeds in such large regimes.

Joining Bhattacharjee and Fox on the INCITE award will be astrophysicists Kai Germaschewksi of the University of New Hampshire and Yi-Min Huang of PPPL. The same team is conducting the ALCC research with the addition of Jonathan Ng of Princeton University. Researchers on the NIF experiments, for which Fox is principal investigator, will include Bhattacharjee and collaborators from PPPL, Princeton, the universities of Rochester, Michigan and Colorado-Boulder, and NIF and the Lawrence Livermore National Laboratory.