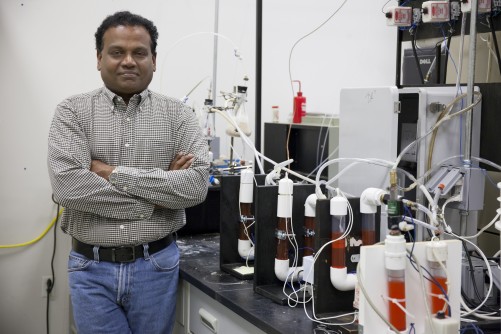 Pratap Pullammanappallil, a UF associate professor of agricultural and biological engineering, poses with an anaerobic digester used in a process he developed at NASA’s request to turn human waste into rocket fuel.

Newswise — GAINESVILLE, Fla. --- Buck Rogers surely couldn’t have seen this one coming, but at NASA’s request, University of Florida researchers have figured out how to turn human waste -- yes, that kind -- into rocket fuel.

Adolescent jokes aside, the process finally makes useful something that until now has been collected to burn up on re-entry. What’s more, like so many other things developed for the space program, the process could well turn up on Earth, said Pratap Pullammanappallil, a UF associate professor of agricultural and biological engineering.

“It could be used on campus or around town, or anywhere, to convert waste into fuel,” Pullammanappallil said.

In 2006, NASA began making plans to build an inhabited facility on the moon’s surface between 2019 and 2024. As part of NASA’s moon-base goal, the agency wanted to reduce the weight of spacecraft leaving Earth. Historically, waste generated during spaceflight would not be used further. NASA stores it in containers until it’s loaded into space cargo vehicles that burn as they pass back through the Earth’s atmosphere. For future long-term missions, though, it would be impractical to bring all the stored waste back to Earth.

Dumping it on the moon’s surface is not an option, so the space agency entered into an agreement with UF to develop test ideas.

“We were trying to find out how much methane can be produced from uneaten food, food packaging and human waste,” said Pullammanappallil, a UF Institute of Food and Agricultural Sciences faculty member and Dhoble’s adviser. “The idea was to see whether we could make enough fuel to launch rockets and not carry all the fuel and its weight from Earth for the return journey. Methane can be used to fuel the rockets. Enough methane can be produced to come back from the moon.”

NASA started by supplying the UF scientists with a packaged form of chemically produced human waste that also included simulated food waste, towels, wash cloths, clothing and packaging materials, Pullammanappallil said. He and Dhoble, now a doctoral student at the University of Illinois, ran laboratory tests to find out how much methane could be produced from the waste and how quickly.

They found the process could produce 290 liters of methane per crew per day, all produced in a week, Pullammanappallil said.

Their results led to the creation of an anaerobic digester process, which kills pathogens from human waste, and produces biogas -- a mixture of methane and carbon dioxide by breaking down organic matter in waste.

In earth-bound applications, that fuel could be used for heating, electricity generation or transportation.

The digestion process also would produce about 200 gallons of non-potable water annually from all the waste. That is water held within the organic matter, which is released as organic matter decomposes. Through electrolysis, the water can then be split into hydrogen and oxygen, and the astronauts can breathe oxygen as a back-up system. The exhaled carbon dioxide and hydrogen can be converted to methane and water in the process, he said.

The study was published last month in the journal Advances in Space Research.