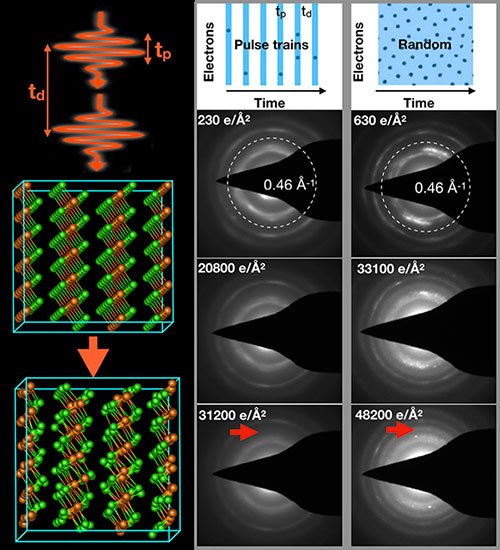 Newswise — To grow better plastics, scientists want to get a good look at the soft sheets that act as a nursery. Sheets of magnesium chloride are incredibly delicate. Oxygen and today’s continuous beam microscopes damage the sheets. A team developed a method to apply pulsed-electron beams to image the beam-sensitive material with atomic resolution. They’ve gained new insights into the material.

This is the first time that beam-sensitive and air-sensitive magnesium chloride has been studied with atomic resolution. Scientists could use the new technique to study other soft materials. The insights they gain could aid the development of sustainable plastics.

A new technique is providing atomic-resolution details about magnesium chloride, a material involved in the production of the most common plastic, polyethylene, and could help to create a path toward sustainable plastics. Researchers at Berkeley Lab in collaboration with Dow Chemical Company and Eindhoven University of Technology in the Netherlands developed the technique.

Although magnesium chloride is widely used as a support structure for growing plastics, the exact way in which it works remains a mystery. Atomic-scale images of magnesium chloride would help clarify its role in plastics production and could help pave the way to more sustainable plastics. Unfortunately, previous attempts at imaging this critical material have been difficult because magnesium chloride can exist in two types of crystal structures that have slightly different arrangements of atoms.

The team developed a technique that delivers periodic pulses of electrons instead of a continuous electron beam to image magnesium chloride. Using a modified electron microscope at Eindhoven, the team found that by pulsing the electron beam like an extremely fast strobe light with one pulse every 160 picoseconds (1 picosecond is one trillionth of a second), the material can essentially “heal” itself between pulses.

Thus, while a continuous beam rapidly damages the delicate crystal structure, the pulsed beam allowed the sample to handle exposure to more electrons without altering it and revealed that sheets of the material stack on top of each other in an irregular arrangement like a haphazard stack of books, which distinguishes magnesium chloride from other materials.

Another problem that other researchers have grappled with when imaging magnesium chloride is that, when the material is exposed to air, it changes in both chemical content and crystal structure (the way its atoms are arranged in space). In addition, when using conventional electron microscopy techniques, the sample is exposed to air as it is transferred to the microscope.

The team minimized the material’s exposure to air before putting it inside the microscope by using a special vacuum-sealed holder designed with collaborators at Dow Chemical Company. Now that the researchers can image the support structures for plastics production at atomic resolution, they will move toward studying the relationships between the support structure and the properties of plastics, paving the way for sustainable plastics.