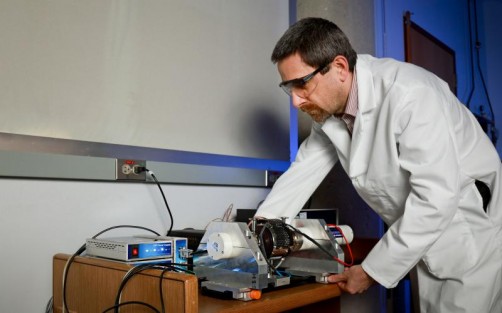 Raphaël Hermann of Oak Ridge National Laboratory studies magnetic materials and batteries using Mössbauer spectroscopy, which precisely reveals displacement between a source of radiation made up of one specific element and a material containing that element. With great sensitivity, it detects tiny changes in energy levels as the source moves away from or toward the material—analogous to changes in a siren’s pitch indicating if an ambulance is approaching or retreating.

His signature specialty, however, is Mössbauer spectroscopy, based on a discovery for which Rudolph Mössbauer received the 1961 Nobel Prize in physics. The technique exploits a resonance—the reason a crystal wine glass shatters when an intense sound wave matches the frequency at which the glass naturally vibrates. In approximately 50 nuclear isotopes (the most common is iron-57), it achieves recoil-free, resonant absorption and emission of gamma rays in solids. Probing a nucleus in a crystal lattice with exactly the right energy to provide a picture of its atomic motion and electronic environment, a Mössbauer spectrometer reveals chemical, structural, magnetic and time-dependent information about samples.

“It’s an extremely versatile tool,” said Hermann, who employs it to study diverse materials for applications in sustainable energy ranging from thermoelectric devices to batteries.

From philosophy to physics

Raised in Belgium, Hermann earned a master’s degree in physics from the University of Liège in 1995 after writing a master’s thesis about the concept of time in physics and completing an internship at the Paris-Meudon observatory with a theorist of fractal space–time. Two publications—including Hermann’s first as sole author—resulted from this work.

He began doctoral studies in astrophysics. But because funding was scarce, he decided instead to write another master’s thesis, in philosophy, about the Aristotelian concept of time, and obtain teaching credentials. He also got married.

After acceptance into a PhD program for solid state physics in 1999, Hermann learned and used Mössbauer spectroscopy in Liège and performed neutron scattering experiments at Germany’s Jülich research center. One experiment, which analyzed a sample provided by ORNL’s Brian Sales and David Mandrus, was published in Physical Review Letters. In 2003 for a scientific conference, Hermann took his first trip to the United States and got a chance to meet some of his co-authors.

Word of his work spread. That summer, Veerle Keppens, who now heads the University of Tennessee (UT) Materials Science and Engineering Department, offered him a postdoctoral fellowship at UT.

To be able to accept it, Hermann scrambled to finish his dissertation, amassing five publications on which he was first author in a cumulative thesis. (He had been a co-author on 15 additional publications.)

In July 2004, he began a 15-month appointment at UT. With scientists from ORNL, he investigated a clathrate caging europium, a heavy atom. The researchers wanted to detect evidence of tunneling, a quantum phenomenon in which a particle passes through a barrier that, according to classical physics, should be impossible to traverse. Hermann’s dissertation work had obtained Mössbauer spectra that clearly proved this tunneling, but confirmation by another technique was required for publication.

Tunneling is often invoked to explain how two particle states appear to be in the same place at the same time, as in the Heisenberg uncertainty principle. “The atoms make one big happy wave function, where they all know at the same time what the other one is doing and all talk together,” Hermann explained. Atomic clocks and quantum computers make use of this behavior.

The proof that two states coexist relies on driving light (or something else that resonates) between them and showing a transition. ORNL’s David Mandrus and Hans Christen suggested a microwave absorption experiment could probe the required region.

“We rented a network analyzer, set it up and waited for the sample to cool to the temperature where this is happening,” Hermann recalled. “All of a sudden, bang, there was a signal—one of these Aha! moments you very rarely get in life where it’s really that clear.”

Hermann had been tempted to stay in the States after his fellowship, but his wife was not ready to move to America. He accepted a job at Germany’s Jülich, where the director encouraged him to apply for an early career award from the Helmholtz Association, which operates facilities beyond those feasible at universities and tackles grand challenges from brain research to climate science. In 2007, Hermann was among only 13 researchers selected.

The Helmholtz Young Investigator Group Leader award supports 5 years of tenure-track research with equipment, graduate students and postdoctoral fellows. Ensuing grants enabled Hermann to hire additional students to study nanostructured materials for thermoelectric applications. By the time Hermann’s award was extended for a sixth year, he was also a principal investigator on joint synchrotron studies conducted with the Russian Academy of Sciences and several European organizations. All told, Hermann’s group produced about 60 papers and 8 PhDs.

By then, Hermann was ready for new challenges. Moreover, his wife, a psychologist specialized in children’s disabilities and a dance instructor and performer, was ready for a new continent. In 2015, Hermann accepted a position at ORNL. In their new home, the couple enjoys exploring America’s national parks with their 7-year-old son. Hermann also enjoys photography and the board game Go.

His next frontier may be topology, a mathematical field concerned with properties of shaped matter as it deforms (e.g., squishes or stretches) but stays continuously connected (i.e., is not torn apart or glued together). Specifically, he wants to investigate how a shape’s chirality, or “handedness,” influences lattice vibrations in materials.

The scientific community understands basics about the topological behavior of electrons and can apply those fundamentals to creating topological insulators. However, not as much is known about how topology affects the lattice vibrations that transport heat in crystals. Said Hermann, “This is a really fascinating topic to explore.”

DOE’s Office of Science supports most of Hermann’s research on neutron scattering to study energy transport by excitations in materials. His battery research is funded by the Office of Energy Efficiency and Renewable Energy, Vehicle Technologies Office. DOE and ORNL’s Laboratory Directed Research and Development Program support additional work.

UT-Battelle manages ORNL for DOE’s Office of Science. The single largest supporter of basic research in the physical sciences in the United States, the Office of Science is working to address some of the most pressing challenges of our time. For more information, visit https://energy.gov/science. —by Dawn Levy