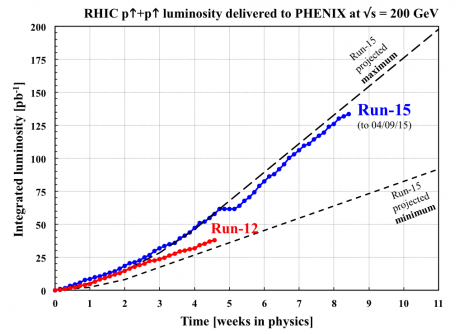 RHIC is producing more than twice as many proton-proton collisions per week during the current run as it did in 2012, the last run dedicated to polarized proton collisions.

An aerial view of the Relativistic Heavy Ion Collider, the only machine in the world capable of colliding beams of polarized protons—protons whose individual spins are aligned in a particular direction—to tease out how the protons' inner building blocks, quarks and gluons, contribute to proton spin.

UPTON, NY - The Relativistic Heavy Ion Collider (RHIC), a powerful particle accelerator for nuclear physics research at the U.S. Department of Energy's Brookhaven National Laboratory, just shattered its own record for producing polarized proton collisions at 200-giga-electron-volt (GeV) collision energy. In the experimental run currently underway at this two-ringed, 2.4-mile-circumference particle collider, accelerator physicists are now delivering 1200 billion of these subatomic smashups per week-more than double the number routinely achieved in 2012, the last run dedicated to polarized proton experiments at this collision energy.

"RHIC is the first collider to use electron lenses for head-on beam-beam compensation," Fischer said. "From what we see so far, the electron lenses appear to be doing what they were designed for."

The team also upgraded the source that produces the polarized protons to generate and feed more of these particles into the circulating beams, and made other improvements in the RHIC accelerator chain to achieve the higher collision rates (or as physicists call it, luminosity).

"The increased luminosity will generate high volumes of data rapidly, giving us time to achieve several high-priority science goals in a single run at RHIC," said Berndt Mueller, the Associate Director for Nuclear and Particle Physics at Brookhaven Lab. "By allowing more science to be done in a fixed number of running weeks, the luminosity increase provides a richer return on the investments made by the nation in the science program at RHIC."

During the initial stage of the run, RHIC physicists are colliding high-energy 200 GeV polarized protons-protons whose individual spins are aligned in a particular direction-with another proton beam to tease out how the protons' inner building blocks, quarks and gluons, contribute to overall proton spin-a long-standing physics mystery. RHIC was the first machine to reveal that gluons play an important role in this intrinsic particle property. The new results will improve on the precision of those measurements. They will also allow scientists to study the coupling between the spin and momentum of the quarks.

With RHIC on track to another year of record performance, scientists are looking forward to a wealth of new insights from this year's data.

Electron lenses use the attractive force negatively charged electrons exert on positively charged protons to compensate for the tendency of the protons in one circulating beam to repel protons in the other. In this context, the lens is a low-energy electron beam that collides with the proton beam. The electron beam has a current and transverse profile that create the same force for a proton passing through it as the proton experiences when passing through the other proton beam, but with the opposite sign. So the negatively charged beam counteracts the repulsive force experienced by the protons.

For more about the science goals of the ongoing run, see "Smashing Polarized Protons to Uncover Spin and Other Secrets" [http://www.bnl.gov/newsroom/news.php?a=11699]

To see the full content of this news release online, including graphics, go to: http://www.bnl.gov/newsroom/news.php?a=11715 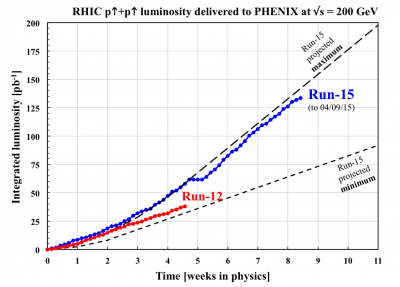 Caption: RHIC is producing more than twice as many proton-proton collisions per week during the current run as it did in 2012, the last run dedicated to polarized proton collisions.

Caption: An aerial view of the Relativistic Heavy Ion Collider, the only machine in the world capable of colliding beams of polarized protons—protons whose individual spins are aligned in a particular direction—to tease out how the protons' inner building blocks, quarks and gluons, contribute to proton spin.