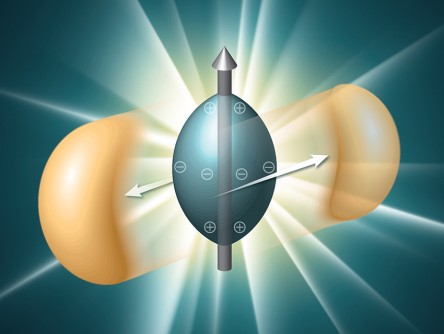 Off-center collisions of gold ions create a strong magnetic field and set up a series of effects that push positively charged particles to the poles of the football-shaped collision zone and negatively charged particles to the "equator." This charge separation is evidence for the existence of a "chiral magnetic wave" formed in the quark-gluon plasma created at the Relativistic Heavy Ion Collider.

New research suggests that the hot, dense “soup” of particles that existed in the early universe was “stirred” by a magnetic wave that pushed around the positively and negative charged particles, according to scientists in the STAR collaboration at the Relativistic Heavy Ion Collider (RHIC) at Brookhaven National Laboratory. The scientists have new evidence that a “chiral magnetic wave” surges through the hot dense matter formed in RHIC’s energetic particle collisions.

The presence of this wave is one of the consequences scientists were expecting to observe if RHIC’s attempt to replicate the conditions of the early universe created a form of matter known as quark-gluon plasma. The tentative discovery would provide additional evidence that RHIC’s collisions of energetic gold ions re-create nucleus-size blobs of quark-gluon plasma thousands of times each second. Re-creating quark-gluon plasma in the laboratory is the only way scientists can study the behavior of “free” quarks and their interactions, offering unprecedented insight into the strong nuclear force through which they interact.

The quark-gluon plasma is a state of matter that existed in the early universe when quarks and gluons -- the building blocks of protons and neutrons (and therefore atoms and most visible matter in the universe today) -- were free before becoming inextricably bound within those larger particles. What the scientists measured was a tendency of negatively charged particles to come out of RHIC’s collisions of gold ions around the “equator” of the fireball, while positively charged particles resided near the poles. The separation begins when the positively charged gold ions collide slightly off center, setting up a swirling positive charge and powerful magnetic field. Any spinning particles created by the energy deposited in the collision, of which there are thousands, will be deflected by this field in a way that depends on the direction of their spin relative to their direction of motion, a property called chirality. The particles will separate along the axis of the magnetic field according to their “chiral charge,” which, in turn, causes particles with different charges to separate. The two effects build on one another like a wave, hence the name “chiral magnetic wave,” pushing more negative particles toward the equator and positive particles to the poles.

RHIC scientists observed this effect by measuring the collective motion of certain positively and negatively charged particles produced in RHIC collisions. Their observation of enhanced elliptic flow of the negatively charged particles and suppressed elliptic flow of the positive particles, resulting in a higher abundance of positive particles at the poles, increased with the net charge density produced in RHIC collisions -- exactly what was expected from calculations using the theory predicting the existence of the chiral magnetic wave.

Seeing evidence for this chiral magnetic wave means the elements required to create the wave must also exist in the quark-gluon plasma. One of these is the chiral magnetic effect -- the quantum physics phenomenon that causes the electric charge separation along the axis of the magnetic field, which has been a hotly debated topic in physics. Evidence of the wave is therefore also evidence that the chiral magnetic effect exists. Furthermore, the observation of the chiral wave provides evidence for chiral symmetry restoration -- a key signature that quark-gluon plasma has been created in the collisions at RHIC.

Interpretation of the data as a chiral magnetic wave provides additional evidence that RHIC’s collisions of energetic gold ions re-create nucleus-size blobs of quark-gluon plasma thousands of times each second. Re-creating quark-gluon plasma in the laboratory is the only way scientists can study the behavior of “free” quarks and their interactions, offering unprecedented insight into the strong nuclear force through which they interact. A chiral magnetic wave interpretation also provides evidence in support of a separate, long-debated quantum phenomenon required for the wave’s existence. Additional measurements are planned to test the chiral magnetic wave interpretation of the data.