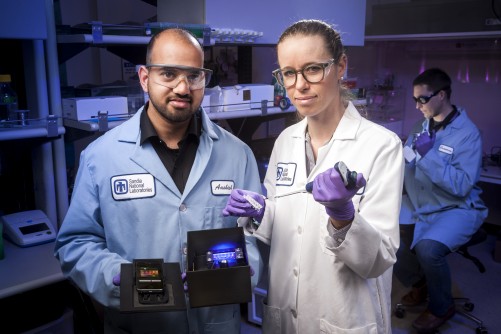 Sandia partnered with Oak Ridge National Laboratory and won a Regional Partnership Award for production of subscale 3-D printed wind turbine blades. Together, the labs are working to shorten the production cycle of new blades and reduce costs. Trying out new wind turbine blade designs is currently expensive due to the multimillion-dollar cost of making complex wind turbine molds. Sandia designed the subscale blade to replicate the wake of a full-scale blade. It was one-third the size and cost 5 percent of the standard full-scale blades. Using 3-D printing, the mold-building process is less labor-intensive as well.

The Neuromorphic Cyber Microscope, developed by Sandia with industry partner Lewis Rhodes Labs, mimics the brain’s ability to process large amounts of data as a way to thwart cyberattacks with great speed and accuracy. Easily integrated into an existing security infrastructure, the Cyber Microscope increases the speed and accuracy of anomaly detection while using less power. It’s more than 100 times faster and 1,000 times more energy-efficient than racks of conventional cybersecurity systems.

SmartLAMP is a smartphone-controlled, battery-operated point-of-care diagnostic device that weighs less than a pound, costs as little as $100 and can detect Zika and other vector-borne diseases rapidly and accurately. Current testing for these viruses requires a laboratory equipped with expensive instruments that can cost up to $20,000, and patients can wait days for results. SmartLAMP is easy to use, easy to store and can be used by almost anyone in modern and developing countries and locations where stable electricity is unavailable.

Advanced Nanomaterials Development by Sandia and IR Dynamics won an Excellence in Technology Transfer Award. The team has been working on thermochromic materials for smart regulation of solar heat by developing nanoparticles that have tunable optical properties triggered by the environment. These nanomaterials transition to let heat through when it’s cold outside and reflect heat when it’s warm. The materials will be incorporated into a variety of products where controlling solar heat gain and infrared reflectivity is a significant advantage.

SpinDx and the Trak Male Fertility Testing System won an Outstanding Commercialization Success Award. Trak is based on Sandia’s SpinDx portable lab-on-a-disk diagnostic technology, which Sandia originally developed to help detect biological and chemical threats. When the inventers realized there could be multiple commercial applications for the technology, they founded Sandstone Diagnostics and licensed the patented SpinDx technology from Sandia.

After researching male infertility, they recognized men were underserved in fertility testing and that a simple device for home use could be created. Sandstone’s patent-pending product, the Trak Male Fertility Testing System, has received clearance from the Food and Drug Administration. Sandstone also is developing the technology for other medical uses that have the potential to save lives.

“These FLC awards highlight the breadth of Sandia technologies that are being developed and transferred to the private sector,” said Jackie Kerby Moore, Sandia’s manager of Technology and Economic Development and the labs’ representative to the FLC. “Combined, Sandia and our partners are benefiting Sandia’s missions in defense and energy and strengthening the U.S. economy in cyber, solar, wind and medical markets.”

The FLC Awards are ranked as some of the most prestigious honors in tech transfer. Sandia winners were recognized at an awards ceremony Aug. 30 in Pasadena, California.