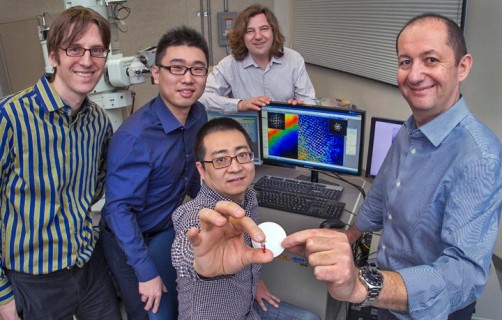 Schematic illustration of the experimental strategy: Double stranded DNA bundles (gray) form tetrahedral cages. Single stranded DNA strands on the edges (green) and vertices (red) match up with complementary strands on gold nanoparticles. This results in a single gold particle being trapped inside each tetrahedral cage, and the cages binding together by tethered gold nanoparticles at each vertex. The result is a crystalline nanoparticle lattice that mimics the long-range order of crystalline diamond. The images below the schematic are (left to right): a reconstructed cryo-EM density map of the tetrahedron, a caged particle shown in a negative-staining TEM image, and a diamond superlattice shown at high magnification with cryo-STEM.

Newswise — UPTON, NY-Using bundled strands of DNA to build Tinkertoy-like tetrahedral cages, scientists at the U.S. Department of Energy's Brookhaven National Laboratory have devised a way to trap and arrange nanoparticles in a way that mimics the crystalline structure of diamond. The achievement of this complex yet elegant arrangement, as described in a paper published February 5, 2016, in Science, may open a path to new materials that take advantage of the optical and mechanical properties of this crystalline structure for applications such as optical transistors, color-changing materials, and lightweight yet tough materials.

"We solved a 25-year challenge in building diamond lattices in a rational way via self-assembly," said Oleg Gang, a physicist who led this research at the Center for Functional Nanomaterials (CFN, www.bnl.gov/cfn/) at Brookhaven Lab in collaboration with scientists from Stony Brook University, Wesleyan University, and Nagoya University in Japan.

"We're using precisely shaped DNA constructs made as a scaffold and single-stranded DNA tethers as a programmable glue that matches up particles according to the pairing mechanism of the genetic code-A binds with T, G binds with C," said Wenyan Liu of the CFN, the lead author on the paper. "These molecular constructs are building blocks for creating crystalline lattices made of nanoparticles."

The difficulty of diamond

As Liu explained, "Building diamond superlattices from nano- and micro-scale particles by means of self-assembly has proven remarkably difficult. It challenges our ability to manipulate matter on small scales."

The reasons for this difficulty include structural features such as a low packing fraction-meaning that in a diamond lattice, in contrast to many other crystalline structures, particles occupy only a small part of the lattice volume-and strong sensitivity to the way bonds between particles are oriented. "Everything must fit together in just such a way without any shift or rotation of the particles' positions," Gang said. "Since the diamond structure is very open, many things can go wrong, leading to disorder."

"Even to build such structures one-by-one would be challenging," Liu added, "and we needed to do so by self-assembly because there is no way to manipulate billions of nanoparticles one-by-one."

Gang's previous success using DNA to construct a wide range of nanoparticle arrays suggested that a DNA-based approach might work in this instance.

The team first used the ropelike DNA bundles to build tetrahedral "cages"-a 3D object with four triangular faces. They added single-stranded DNA tethers pointing toward the interior of the cages using T,G,C,A sequences that matched up with complementary tethers attached to gold nanoparticles. When mixed in solution, the complementary tethers paired up to "trap" one gold nanoparticle inside each tetrahedron cage.

When mixed and annealed, the tetrahedral arrays formed superlattices with long-range order where the positions of the gold nanoparticles mimics the arrangement of carbon atoms in a lattice of diamond, but at a scale about 100 times larger.

"Although this assembly scenario might seem hopelessly unconstrained, we demonstrate experimentally that our approach leads to the desired diamond lattice, drastically streamlining the assembly of such a complex structure," Gang said.

The proof is in the images. The scientists used cryogenic transmission electron microscopy (cryo-TEM) to verify the formation of tetrahedral frames by reconstructing their 3D shape from multiple images. Then they used in-situ small-angle x-ray scattering (SAXS) at the National Synchrotron Light Source (NSLS, www.bnl.gov/ps/), and cryo scanning transmission electron microscopy (cryo-STEM) at the CFN, to image the arrays of nanoparticles in the fully constructed lattice.

"Our approach relies on the self-organization of the triangularly shaped blunt vertices of the tetrahedra (so called 'footprints') on isotropic spherical particles. Those triangular footprints bind to spherical particles coated with complementary DNA, which allows the particles to coordinate their arrangement in space relative to one another. However, the footprints can arrange themselves in a variety of patterns on a sphere. It turns that one particular placement is more favorable, and it corresponds to the unique 3D placement of particles that locks the diamond lattice," Gang said.

The team supported their interpretation of the experimental results using theoretical modeling that provided insight about the main factors driving the successful formation of diamond lattices.

"This work brings to the nanoscale the crystallographic complexity seen in atomic systems," said Gang, who noted that the method can readily be expanded to organize particles of different material compositions. The group has demonstrated previously that DNA-assembly methods can be applied to optical, magnetic, and catalytic nanoparticles as well, and will likely yield the long-sought novel optical and mechanical materials scientists have envisioned.

"We've demonstrated a new paradigm for creating complex 3D-ordered structures via self-assembly. If you can build this challenging lattice, the thinking is you can build potentially a variety of desired lattices," he said. 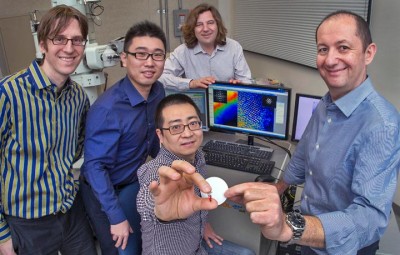 Caption: Schematic illustration of the experimental strategy: Double stranded DNA bundles (gray) form tetrahedral cages. Single stranded DNA strands on the edges (green) and vertices (red) match up with complementary strands on gold nanoparticles. This results in a single gold particle being trapped inside each tetrahedral cage, and the cages binding together by tethered gold nanoparticles at each vertex. The result is a crystalline nanoparticle lattice that mimics the long-range order of crystalline diamond. The images below the schematic are (left to right): a reconstructed cryo-EM density map of the tetrahedron, a caged particle shown in a negative-staining TEM image, and a diamond superlattice shown at high magnification with cryo-STEM.