Scientists Model The "Flicker" of Gluons in Subatomic Smashups 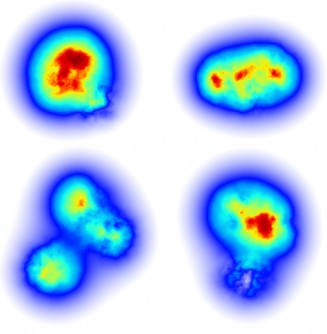 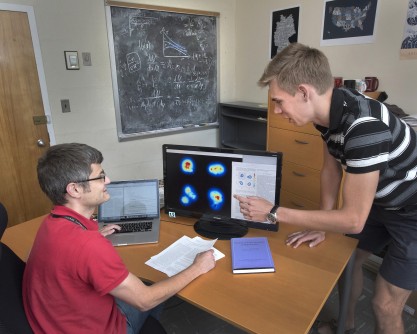 Scientists Model the "Flicker" of Gluons in Subatomic SmashupsModel identifies fluctuations in the glue-like particles that bind quarks within protons as essential to explaining experimental data on proton structureAugust 2, 2016

A new study just published in Physical Review Letters reveals that a high degree of gluon fluctuation-a kind of flickering rearrangement in the distribution of gluon density within individual protons-could help explain some of the remarkable results at RHIC and also in nuclear physics experiments at the Large Hadron Collider (LHC) in Europe.

Right now it's impossible to directly "see" the distribution of gluons within individual protons and nuclei-even at the most powerful particle accelerators. So Brookhaven Lab theoretical physicists Björn Schenke and Heikki Mäntysaari developed a mathematical model to represent a variety of arrangements of gluons within a proton.

"It is very accurately known how large the average gluon density is inside a proton," Mäntysaari said. "What is not known is exactly where the gluons are located inside the proton. We model the gluons as located around the three valance quarks. Then we control the amount of fluctuations represented in the model by setting how large the gluon clouds are, and how far apart they are from each other."

The fluctuations represent the behavior of gluons in particles accelerated to high energies as they are in colliders like RHIC and the LHC. Under those conditions, the gluons are virtual particles that continuously split and recombine, essentially flickering in and out of existence like fireflies blinking on and off in the nighttime sky.

Scientists would like to know if and how these fluctuations affect the behavior of the particles created when protons collide with heavy nuclei, like the gold ions accelerated at RHIC. Data from RHIC's proton-gold collisions, and from the LHC's proton-lead collisions, have shown evidence of "collective phenomena"-particles emerging with some "knowledge" of one another and in some preferred directions rather than in a uniform fashion. In RHIC and LHC smashups of two large particles (gold-gold or lead-lead), this collective behavior and direction-dependent flow has been explained by the liquid state of quarks and gluons-the "perfect liquid" quark-gluon plasma (QGP)-created in these collisions. But collisions of tiny protons with the larger nuclei aren't supposed to create QGP. And the current understanding of the QGP can't completely explain the experimental results.

"If we want to understand what happens, we have to know the geometry of the proton just before the collisions. It makes a difference if you have a round object hitting a nucleus vs. something with a more irregular structure hitting the nucleus," Mäntysaari said. "The collective behavior we see in the experiments might imply that there is some more complex structure to the proton," he added, noting that exploring the internal structure of the proton is a fundamental research endeavor for nuclear physicists.

The model developed by Mäntysaari and Schenke describes how the proton structure can fluctuate. To test the model, they turned to a different set of experimental data-results from collisions of electrons with protons at the HERA accelerator in Germany. A particular reaction that sometimes occurs in these collisions-where a particle called a J/psi is produced and the proton breaks up into a spray of other particles-is highly dependent on the level of structural fluctuations in the proton.

The Brookhaven theorists used their model to predict the frequency of this interaction while varying the level of gluon fluctuations, and compared their calculations with the experimentally observed data. They found that the version of their model with the highest degree of fluctuations was the one that fit the data best.

"This process doesn't happen at all if the proton always looks the same. The more fluctuations we have, the more likely this process is to happen," Mäntysaari said.

He and Schenke are now looking to apply this knowledge to the proton-nucleus collisions.

"When the gluon fluctuations are incorporated into the hydrodynamic models of QGP, we get a better agreement with the experimental data from these proton-nucleus collisions," Mäntysaari said.

As Schenke noted, "This implies that the formation of a strongly interacting QGP in proton-nucleus collisions provides a possible explanation of the experimentally observed collectivity."

If the nuclear physics community gets to build a proposed future project called an Electron-Ion Collider (EIC), they'll have an opportunity to improve on the precision of these results.

"An EIC will allow us to measure this more precisely, and in different kinematics-how the fluctuations depend on energy, for example," Mäntysaari said. "And an EIC can also do the same kind of studies in nuclear targets to see how much the structure of the nucleus fluctuates event by event."

In essence, the EIC would be a true gluon-imaging machine-a way to directly probe the internal structure of the building blocks of visible matter, including the glue that binds everything in the universe today.

An electronic version of this news release with related graphics[http://www.bnl.gov/newsroom/news.php?a=11860] 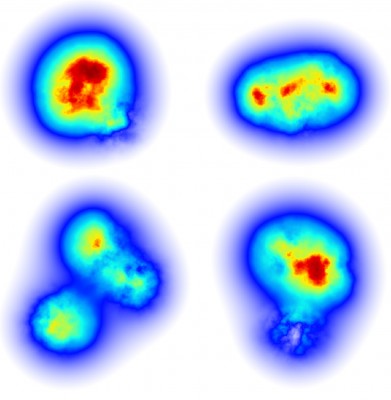 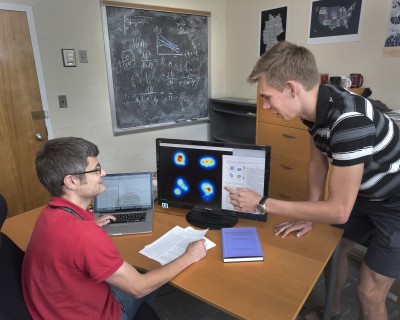