Colliding gold nuclei at various energies enables scientists to investigate phases of nuclear matter and their possible co-existence at a critical point. 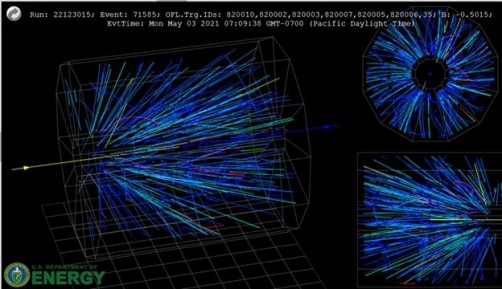 Left: tracks in the STAR detector from collisions of a 3.85 GeV gold beam in the Relativistic Heavy Ion Collider hitting a gold target from the left. Upper right: radial projection perpendicular to the beam. Lower right: side projection along the beam.

Newswise — Nuclear matter consists of interacting quarks and gluons, described by the theory of quantum chromodynamics (QCD). Like ordinary matter, it can exist in different phases, in today's world predominantly as protons and neutrons in atomic nuclei. Collisions of heavy nuclei provide a unique environment to study its properties. The well-known hadronic phase of nuclear matter consists of baryons (protons and neutrons) and a large number of elementary particles. Heavy ion collisions have revealed a new phase of nuclear matter with freely moving quarks and gluons, the Quark Gluon Plasma (QGP). The QGP is like the matter in the early universe and in dense compact stars. Despite these discoveries, the structure of nuclear matter and the transition between its hadronic and QGP phases are largely unknown.

Scientists are aiming to establish if a critical point exists in the phase diagram of nuclear matter. At this critical point, the QGP would coexist with a gas of protons, neutrons, and other particles. Scientists found that gold-gold collisions at the lowest energies accessible at the Relativistic Heavy Ion Collider (RHIC) do not form a QGP, while at energies above 20 giga-electron volts (GeV) the QGP is observed. This indicates that the critical point, if it exists, should be between collision energies of 3 GeV and 20 GeV. This research is an important step in mapping the structure and phases of quantum chromodynamics.

Heavy ion collisions at the highest energies have revealed a new phase of nuclear matter with freely moving quarks and gluons, the Quark Gluon Plasma (QGP). The Beam Energy Scan program at the RHIC particle accelerator, a Department of Energy (DOE) Office of Science user facility at Brookhaven National Laboratory, has enabled the study of the transition between QGP and hadronic matter over a wide energy range. It revealed clear evidence that gold-gold collisions at the lowest energies accessible produce predominantly hadronic matter. In contrast, experiments at 20 GeV and above form a quark gluon plasma. At collision energies of 3 GeV, the data taken by the STAR experiment in the fixed target mode can be reproduced by theoretical model calculations that only consider hadronic interactions. In addition, the researchers measured kinematic distributions for the first time for light hyper-nuclei that involve hadrons with strange quarks as well as ordinary nucleons (protons and neutrons). This is the beginning of the era for studying hyperon-nucleon interaction, an essential step for understanding the inner structure of compact stars.

This research was supported by the Department of Energy Office of Science, Office of Nuclear Physics.