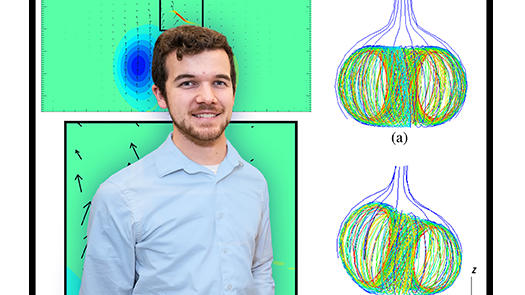 Newswise — Nothing seems more familiar than the sun in the sky. But mysterious swirls, jets, and flashes of powerful light that scientists cannot explain occur in the sun’s outer atmosphere all the time. Now, researchers at the U.S. Department of Energy’s (DOE) Princeton Plasma Physics Laboratory (PPPL) have gained insight into these puzzling phenomena.

Using powerful computers to simulate the solar atmosphere, or corona, the researchers found that the swirls and flashes of X-ray light, together known as a coronal jets, could be caused by globs of plasma emerging from the sun in ball shapes that resemble magnetic shapes known as spheromaks. “This research confirms the hunches of PPPL physicist Masaaki Yamada, who first had the idea,” said Joshua Latham, first author of the paper reporting the results in Physics of Plasmas.

Latham completed the research as part of his senior thesis for the physics department while he was an undergraduate at Princeton University. He currently is a doctoral student in the Nuclear Engineering and Radiological Sciences department at the University of Michigan.

Large coronal jets, though originating 93 million miles away on the sun, can affect us here on Earth. The jets can contribute to outpourings of particles known as the solar wind that can strike our planet’s outer atmosphere and interfere with communications satellites and power grids. Smaller jets, which are studied at PPPL, also contribute to the solar wind, and along with bursts of X-ray light can help heat the corona. Any insights into how the jets form could help scientists to predict their occurrence and prepare Earth for their impact.

The simulations indicate that a dome-shaped magnetic structure forms on the sun’s surface prior to the coronal jets. Then, magnetic field lines at the bottom of the structure detach from the solar surface in a process known as magnetic reconnection, the breaking apart and violent reconnection of magnetic fields that occurs throughout the universe.

Now the dome begins to tilt. As it does so, the top magnetic field lines touch the surrounding lines and create another round of reconnection. Plasma within the dome then speeds up and releases the stored magnetic energy. “In essence, these results show the physical processes that would have to occur to produce the flashes of X-ray light,” Latham said.

“Past simulations have suggested that coronal jets stem from reconnection, but no one was sure what the magnetic configuration at the beginning of the process would be like,” he said. “These findings indicate that a spheromak might be the originating structure, and that it’s tilting triggers the reconnection.”

For a scientist studying plasma, the fourth state of matter composed of superheated gas that conducts electricity, the sun is a natural subject. “We study plasma here at PPPL, and stars are made of plasma,” said PPPL physicist Elena Belova, who modified the computer code that produced the simulation and along with Yamada supervised Latham’s project. “And if you want to study plasma and stars, it would make sense to study the star next to us,” she said.

Physicists have also tested spheromaks as a possible way to harness on Earth the fusion energy that powers the sun and stars. Fusion combines light elements in the form of plasma to generate massive amounts of energy. Scientists are seeking to replicate fusion for a virtually inexhaustible supply of power to generate electricity.

Yamada and colleagues will now use a PPPL device known as the Magnetic Reconnection Experiment (MRX) to test the spheromak idea in a laboratory. Funding that work is a grant from the National Aeronautics and Space Administration (NASA).

This research was supported by the DOE (Fusion Energy Sciences). Simulations were carried out at the National Energy Research Scientific Computing Center (NERSC), a DOE Office of Science User Facility at Lawrence Berkeley National Laboratory in Berkeley, California.

From Nashville to New Hampshire, PPPL‚Äôs student interns do research, attend classes and socialize from their home computers