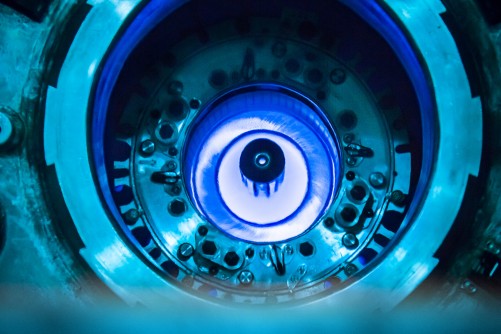 The High Flux Isotope Reactor, a Department of Energy Office of Science User Facility that creates continuous neutron beams, is the site of a new neutrino experiment. Yale-led PROSPECT will probe neutrinos formed as a byproduct of radioactive decay processes.

Newswise — Soon to be deployed at the Department of Energy’s Oak Ridge National Laboratory is an experiment to explore new physics associated with neutrinos. The Precision Oscillation and Spectrum Experiment, or PROSPECT, is led by Yale University and includes partners from 14 academic and governmental institutions. The DOE High Energy Physics program will support the experiment at the High Flux Isotope Reactor (HFIR), a DOE Office of Science User Facility at ORNL. The neutrino, the subject of a 2015 Nobel Prize, remains a poorly understood fundamental particle of the Standard Model of particle physics.

These electrically neutral subatomic particles are made in stars and nuclear reactors as a byproduct of radioactive decay processes. They interact with other matter via the weak force, making their detection difficult. As a result of this elusiveness, neutrinos are the subject of many interesting and challenging detection experiments, including PROSPECT.

“Unique capabilities of ORNL will enable us to broaden the understanding of neutrino properties,” said David Dean, director of ORNL’s Physics Division. “The expansion of neutrino experiments at Oak Ridge National Laboratory is a win for the lab because we have a new scientific focus area, and a win for the scientific community because ORNL has unique neutrino sources that physicists will utilize to explore neutrino science.”

It turns out that the two DOE Office of Science User Facilities for neutron scattering also produce, in addition to neutrons, a copious supply of neutrinos as a byproduct. These two sources are the Spallation Neutron Source, which delivers pulsed neutron beams, and HFIR, which provides continuous neutron beams. PROSPECT will be the first experiment at HFIR to detect neutrinos emitted from the reactor.

In development for more than 3 years, the PROSPECT experiment has 68 collaborators, including 14 from ORNL. Scientists will extract information about neutrino oscillations—transmutations of electron neutrino, muon neutrino and tau neutrino “flavors” from one to another. Specifically, they want to find out if neutrino oscillations occur over short distances (less than 65 feet). Neutrino oscillations have not been observed at these distances. Observing neutrino oscillations at these distances, coupled with PROSPECT’s other objectives of high-precision measurements of the neutrino flux and spectrum from HFIR, could reveal the existence of a fourth neutrino flavor that does not interact via the weak force, a “sterile neutrino.” Seeing this new particle would necessitate revising the Standard Model, which describes elementary particles and the forces that govern them.

The process to select the location of PROSPECT was competitive; HFIR and other U.S. research reactor sites were assessed. “We have been working for over three years to ensure that the experiment is located at HFIR,” said Chris Bryan, who manages experiments at HFIR for ORNL’s Research Reactors Division. These efforts include installing a 30-ton detector system (with shielding) in an operating research reactor building as close as 21 feet to the reactor core without affecting HFIR’s primary missions of neutron scattering research, isotope production and testing of irradiated materials. “We have been actively engaged with ORNL’s Physics Division, the first line for data gathering as well as ongoing care of the neutrino detector at HFIR,” he added.

The ORNL-site principal investigator for the project, physicist Alfredo Galindo-Uribarri, said reviewers determined HFIR was the best reactor for short-baseline physics. “As one of the best-studied reactors, its behavior is very well understood,” he said. “The research reactor has the most compact core of any reactor and burns highly enriched uranium. The fission products decay to form neutrinos. Particles start out as electron neutrinos and then change to muon and tau forms.” Reactor neutrino detection at HFIR necessitates a detailed understanding of background radiation fields. Researchers at ORNL have been engaged in detailed measurements to understand the sources of background production at HFIR and demonstrate that reactor-produced neutron backgrounds can be suppressed with judiciously chosen shielding material.

Near the reactor, experimenters will place a 15-foot-high movable detector. They will fill it with 3 tons of liquid scintillator to detect the flash produced when a neutrino combines with a proton to form a positron (or anti-electron) and a neutron. A prototype detector has been built at ORNL for tests in preparation for the arrival of PROSPECT’s detection instrument, now under construction at Yale. That instrument will be deployed at ORNL’s famous research reactor before data collection begins next year.