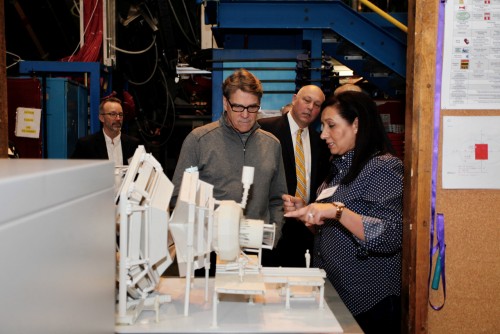 Staff Scientist Latifa Elouadrhiri (r) uses a display in Experimental Hall B to explain the detector systems used in CLAS12 to Secretary of Energy Rick Perry. 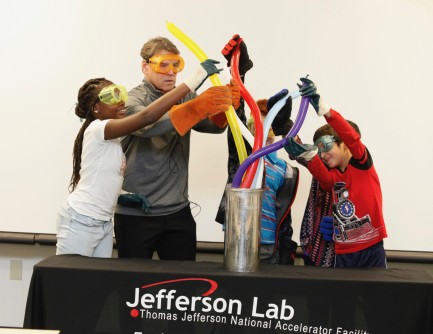 U.S. Secretary of Energy Rick Perry gets help from Newport News elementary school students - conducting an experiment during his visit to Jefferson Lab. They are seeing what happens to balloons when they are submerged into Liquid Nitrogen. 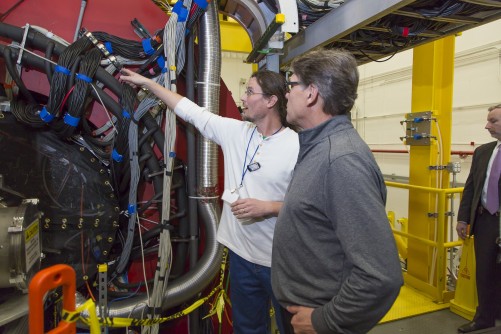 As the top official at the U.S. Department of Energy, the Secretary oversees Jefferson Lab and the 16 other DOE National Laboratories that form the backbone of the nation’s scientific infrastructure. During his visit, Secretary Perry noted Jefferson Lab’s unique role within the DOE lab system.

Commenting on what he experienced of Jefferson Lab during his compressed visit, Secretary Perry observed, "I'm not sure there's any other place in the federal government that has a more important role than what you are doing."

During his visit, the Secretary received briefings, spoke with students participating in one of the lab’s long-running STEM programs, toured portions of the lab, spoke with researchers and led a Town Hall meeting.

On the tour, Secretary Perry visited portions of the Continuous Electron Beam Accelerator Facility (CEBAF), where he spoke with a few of the more than 1,500 scientists who use CEBAF’s world-leading research capabilities to conduct experiments that could lead to a new understanding of the nucleus of the atom and how its most basic building blocks make up the visible matter of our universe.

The Secretary also visited the laboratory’s Data Center and its Superconducting Radiofrequency (SRF) Institute where scientists and engineers are continually pushing the boundaries to enhance and improve particle acceleration capabilities and technologies. Staff showed off their R&D work and the highly specialized particle acceleration devices they are constructing for the LCLS-II project at SLAC National Accelerator Laboratory.

He was passionate in his praise of the work carried out at the national labs. And, referring to his year leading the Department of Energy, Secretary Perry said, "...I have never worked with people that I find more interesting, more intelligent, more patriotic than the men and women in the national labs."

Jefferson Science Associates, LLC, a joint venture of the Southeastern Universities Research Association, Inc. and PAE Applied Technologies, manages and operates the Thomas Jefferson National Accelerator Facility, or Jefferson Lab, for the U.S. Department of Energy's Office of Science.DOE’s Office of Science is the single largest supporter of basic research in the physical sciences in the United States, and is working to address some of the most pressing challenges of our time. For more information, visit science.energy.gov. 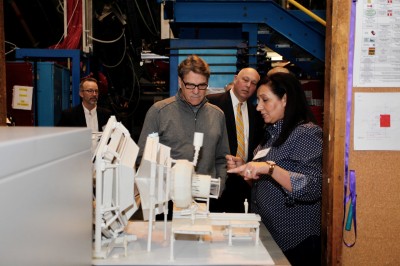 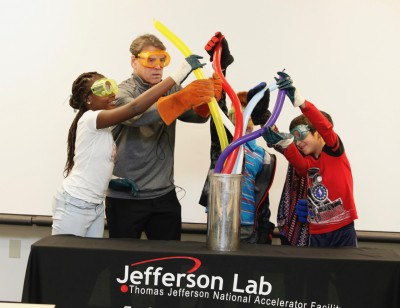 Caption: U.S. Secretary of Energy Rick Perry gets help from Newport News elementary school students - conducting an experiment during his visit to Jefferson Lab. They are seeing what happens to balloons when they are submerged into Liquid Nitrogen. 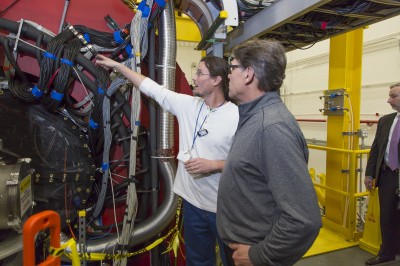